A Serious Case Of The Lazies 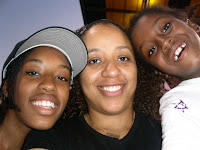 Hey everyone. I'm feeling a little better today. Thanks to Clem and Becky for covering for me yesterday; I was a bit out of sorts. But We're all back today in full force. So let's get on with the weekend update that I never got a chance to post.

I was meeting Irene for a mini-girls' night of bra shopping and food eating, but first I had to drop in on the Farmers' Market in Union square. Nothing was really catching my eye until HELLO- WINE TASTING!!

They were all like, "support your local wineries" and I'm like, "yes, please, I'll try them ALL." Then I walked away with a $14 Cabernet Sauvignon; my contribution to the local economy. 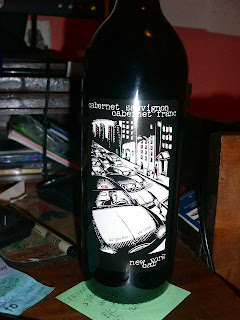 Who wants to come over and help me drink it down??

Then, at Macy's, where they were having a "Buy 2, Get One Free" bra sale, I fell in love with Maidenform bras. Unlike VS underwear, my entire breasts fit into the cups of these bras so perfectly... it's like it was made just for me. I might have to break up with Vicky until she comes out with something just as comfortable!

Finally, we ended up at The Chip Shop on Atlantic Avenue, where many of the menu items are greasy as hell and deep fried. My kind of place! Irene was tamer then me and had the Shepherd's Pie with chips; I had this MASSIVE plate of chicken curry with mash. YO- this plate was bigger than my HEAD! Try as I might, I could not finish the entire thing... *sigh* 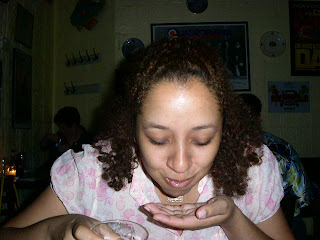 In my defense- they served me the shot in a regular glass- not a shot glass- so what you see here is me trying to salvage some of the whiskey trying to escape down the sides of my cheeks! I'm usually not this messy until the 5th shot...

Babies were due back to me by 7PM. I had a list of stuff I wanted to accomplish before they showed up... but then I thought I heard a strange noise coming from the sofa. When I approached it cautiously to investigate the strange noise, one of the cushions jumped up, grabbed me and FORCED me to lay down and take one of the sweetest naps known to man.

Some time around five I went grocery shopping. They arrived at 7-ish.

I didn't make the turkey chili like I wanted to, but instead made the yummiest fish tacos EVER. So yummy in fact that they were asking for seconds. Imagine it-- fresh tilapia fillets cooked in medium salsa and adobo, layered in a taco shell with diced carrots, shredded cheese and a teeny bit of more salsa. YUM-O!

Listen, I'm just an awesome cook. Deal with it.

It was nice to have them home... nice to have someone to cook for again. I've been ordering take-out or eating Cheerios all summer... but don't tell anyone I said so.

We all had a case of the LAZIES; no one wanted to shower or wash their hair, 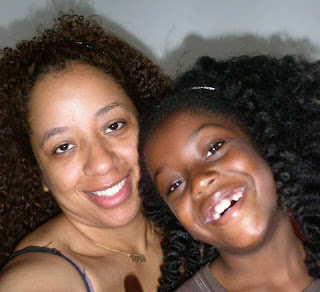 and NO ONE wanted to deal with no stupid laundry, either. The couch still had me by the throat BUT we needed to get Ns school supplies, some more groceries (because I shop at like 4 different stores to make sure I get the best deals on everything), and still make it to Coney Island by 5PM for the Brooklyn Cyclones' game against the Hudson Valley Nobody's. (No, that's not their names, but whatever. That's what I call them). 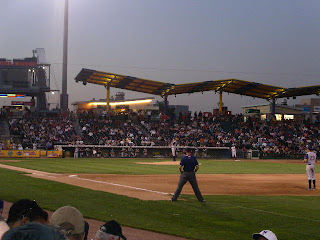 But because the LAZIES had a hold of us, we didn't leave to go shopping until 2PM, did a lot more walking than we anticipated IN THE HEAT, had a stank run in with a cab driver ($20 from Atlantic Mall to Greenwood? You're MOTHER is gonna pay $20 you fucking thief! It costs me less than that to get home from Minnie's house. And she's all the way in Bed-Stuy!), and didn't make it to the game until 6:30-ish. 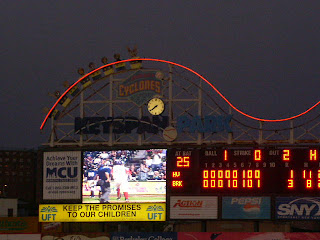 The babies even got to run the bases on the field afterwards! 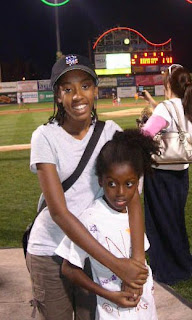 The plan was to do laundry for real for real, because I had nothing to wear to work on Tuesday. It was supposed to be laundry, take out Ks braids, blow out Ns hair, go clothes shopping for N and then drop in at Minnie's impromptu BBQ before heading back home for "Beauty Night" which is where I give the babies facials and mani-pedis (just 'cause I'm not a girlie-girl doesn't mean they can't enjoy that stuff!).

That was the plan.

So at like 4:30PM when we finally walked out of the house and made it back to the Atlantic Mall, where I proceeded to buy an outfit for work the next day and we spent way too much time perusing the aisles, because when we finally arrived at Minnie's, all the food was gone!

We still hung out, made the best of the lil bit that was left behind (plus Titi Gloris showed up with some arroz con pollo that the babies devoured) and chilled. So much so that we got home too late to have beauty night.

So we had it on Tuesday night instead: 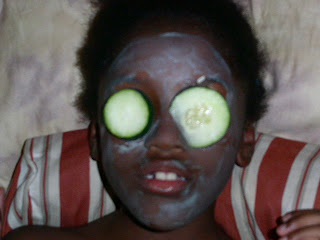 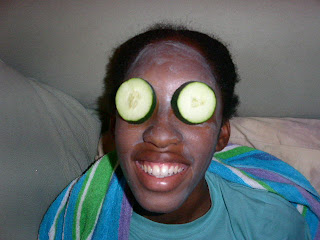