Tonight I met the most beautiful man.

Wait- let me back up a bit and go on a tangent.

Recently, I decided I was done dating. I don't really like myself right now and I REALLY don't like other people, and the thought of a first date makes me want to burrow INTO my sofa instead of just laying on it. And TMI but it has to be said, I don't enjoy sex. It's messy and my fibroids make the act rather painful. The thought of having to fake it YET AGAIN with someone new is too much for me right now. I don't want to. So I decided to just be done with dating because I know how you men are; no sex is a dealbreaker, right? Right.

On another tangent, having to deal with Ks tuition bills and my own suffocating debt has forced me to really face the music about my finances and crawl out of this broke-ass sinkhole once and for all. I have a great job that pays me super-well. There's no reason why I should be emptying out piggy banks at the local CoinStar machine just to buy groceries. At work, I heard about a free service offered by the City to meet with a financial counselor one-on-one and I jumped at the chance. FREE is my favorite word these days, and frankly, all I can afford until I snag up three more jobs like the third cousin twice removed of the Hedleys.

This is where both tangents meet up and give birth to the first sentence of this post.

Tonight I met the most beautiful man. He was tall, brown skin, bearded, fit, smart, well-groomed, funny, charming, and possessed the sexiest pair of lips I've seen in a very long time. He plays football, y'all. FOOTBALL. He owns his own home and other properties. He's so "good on paper" I'd sign off on a myomectomy so fast, just so that I could give him a million babies.

People, he was EVERYTHING in my imagination, at least.

Tonight I met the most beautiful man. But, because my life is a motherfucking sitcom, that man just happens to be the person who is now privy to my atrocious credit score, terrible spending habits, and irresponsibly out-of-control debt.

Touché, Jesus. I see what you did there.

*smooches...losing miserably at life*
-----------
I've never really been good at chess but I do believe this is a checkmate situation, no?
More genius from The Jaded NYer
Email ThisBlogThis!Share to TwitterShare to FacebookShare to Pinterest
Labels: A Life in Shambles, Bellevue Calling, Big City Livin', Blah, Humor, Irrational Thoughts, Negritos, Revelations, Romance? What's Romance?

ME: (self-medicating, again) I want Thai food but I also want nachos. UGH. Why don't they sell nachos at the Thai place?

ME: I CAN FEEL YOU JUDGING ME!

*smooches...waiting for one of y'all to come get her*
----------
there's a funny dynamic between us these days; a good one, though, so don't be alarmed
More genius from The Jaded NYer
Email ThisBlogThis!Share to TwitterShare to FacebookShare to Pinterest
Labels: A Life in Shambles, A Quick Note, Babies, Bellevue Calling, Body Wars, Humor, Latinos Rule, Mi Familia, Musings, WooSAH

"Feelings are just visitors, let them come and go." -Mooji

I don't know who this Mooji dude is (actually I used the enemy AKA Google and so I DO know who he is), but I don't like people all up in my space. I can count on one hand the people that have been to my place (outside of family, of course. You can't keep those fools out!). I don't care for visitors; probably one of the main reasons I keep such a tiny, uninviting place. And I definitely don't want FEELINGS all up in my business, too.

My real problem, though, is that only the bad feelings seem to come more often and rarely, if ever, go.

Now, I'm going to write something here because this is my blog where I share my truths, and ask that you please, PLEASE, take several chill pills. Don't send me referrals to doctors or be glib or anything. I know this is my problem and it is I, Raquel Penzo, who will solve it. Please just accept that this is something I need to write for ME. This is where I vent. I need to release it.

More and more I find that I don't have the courage to leave my apartment. That's the best word that I could think of to describe what I'm lacking, or what I feel I'm lacking. And I find that the sofa has become this safe haven where nothing can hurt me, when in fact it's the thing that's hurting me the most. That I'm eating, not for nourishment or even pleasure, but because I don't know what else to do. That I lose myself in TV and movies because the real world has become too much. That the only thing that keeps me from shutting down is that I'm responsible for two other lives besides my own that require me to hold down a job and run a household.

That every morning when the sun shines in my face, my first thought resembles this meme: 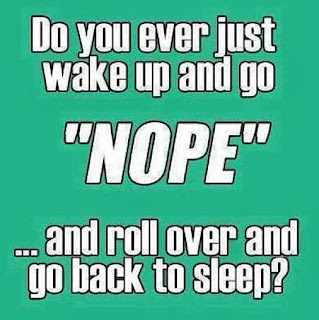 But eventually I get up. I do things. I paint on a smile and I let words escape my mouth. I crack jokes at work. I put on makeup and comb my hair. I answer phone calls and participate in silly Twitter conversations. I write irreverent blog posts and then, when it's just me and my thoughts and my sofa and my Netflix, I'm free to feel things without judgements. Even if those feelings stay too long and tell me I'm stupid and fat and ugly and useless and lazy. I just need to feel them. In private. Without witnesses.

And then, in my own time, in my own way, I can let them go. Like Mooji suggests.

We're All Women. It's Science.

You heard it here first, girlies.

*smooches...trying to erase the claymation vag-to-penis transformation from my mind*
-----------
although it was kind of funny
More genius from The Jaded NYer
Email ThisBlogThis!Share to TwitterShare to FacebookShare to Pinterest
Labels: A Quick Note, Funny Funny Funny, Goodness, Revelations

If You Want It You Got It

"Here is the thing. Yoga is not about bliss, but about honesty. Spirituality is not certainty, but the longing of the heart. Enlightenment is not ‘letting go’ of bad feelings, but understanding them, what they’re doing to us, and how they are expressed in the body." -Karin L. Burke

I'll be giving it a go again this weekend. Clearly I was in the wrong mindset before. Maybe this time it will stick.

If Lenny Kravits was my yoga instructor, though, I'd NEVER quit again!

*smooches...not so much inspiration for you but for me*
----------
I mean, it IS all about me anyway, always, every time
More genius from The Jaded NYer
Email ThisBlogThis!Share to TwitterShare to FacebookShare to Pinterest
Labels: A Life in Progress, A Quick Note, Body Wars, Do Better, Everyday I'm Strug-a-lin, Goodness, HealthyJaded, Music, Revelations, The Best You

And That's Why She's Walking Around With A Black Eye

ME: (describing my fake alter egos) ...and then there's Maritza- she's a high school drop out, is loud, carries a razor tucked away in her mouth and will cut you if you even think about looking at her man...

N: Wait- how does your alter ego have a boyfriend but you don't.

*smooches...putting a 13-year-old up for sale on eBay*
----------
I mean the absolute NERVE
More genius from The Jaded NYer
Email ThisBlogThis!Share to TwitterShare to FacebookShare to Pinterest
Labels: Babies, Humor, Mi Familia, Romance? What's Romance?

Let me tell you what happens when you press the statistics tab on blogger: you find out the weird and fabulous ways people end up on your site. Someone actually looked up "kind naked feet pic" and was directed to my site. WHY? I hate feet- everyone knows that. I don't like looking at them, I don't like mine, I don't even like to measure things in "feet"!

Another bunch of crazies typed "bitch please, I'm Dominican" and was directed here and, umm, I don't recall ever writing something like that. SkyNet has clearly developed some sort of technology that reads minds via keystrokes. CLEARLY.

If you ask me this is more proof that Google has waged war with me because I know it's already become self-aware, and that the Robot Apocalypse is near.

"Ain't Nobody Got Time For That!"

You know what people love to tell me and other singles, in general? "Relationships take work."

We've been married a gazillion years but it's not been easy, it's a lot of hard work.
To have a happy relationship you gotta put in the work.
If you work at it, both you and your partner will have a happy life.

Bitch, WHAT? WORK? As in MORE WORK THAN I ALREADY DO EVERY MOTHERFUCKING DAY?

Running a country is hard work. Changing a tire is hard work. Staying in love with someone long enough to not want to stab them in the face while they sleep should be a piece of cake! I shouldn't have to clock in and out of my relationship. Or look forward to vacation days away from my boo.

Love shouldn't be work. Love should be my refuge from all that nonsense out in the world. And now I'm to understand that the thing that's supposed to complement my life until the end of days ALSO takes WORK???

Nah, I'm good. Y'all can keep all of that. I think I'll go ahead and buy that Golden Girls house me and the homie Tiffany have been talking about; I got dibs on being Dorothy!

My Bad, Did I Forget To Say Bye?

First, for old time's sake, some welcome back music:

OK so listen, I took another impromptu break. Whatever. Don't get all fake-upset. You clearly did just fine filling your days without me popping up in your inbox every day.

So what's new with me? Let's see...I'm still single (yeah, baby!!), K's off at college (one down, one to go), I've gained more weight and give no fucks about it, and I've finally decided to put myself on a real budget (which I really had no choice about; paying for college is a BITCH!).

N and I are settling into our non-K existence just fine so far, and I've been keeping busy trying to make my literary life bigger and better and more well-known throughout NYC. And of course, I've been ruining my eyesight and killing braincells watching TV and movies until the wee hours of the night. Writing? Yeah, not so much. But soon. SOON.

Meanwhile, it's Latino Heritage Month; be sure and hug a Mexican today or something.

So, what y'all been doing?