Hey y'all, hope your weekends were cool and all that good stuff.

But enough about you, here's what's doing with me:

Tune In Tonight
Jack and I are Single and Fabulous (exclamation point), but not for lack of trying to find a mate. We even went looking for love online *GASP! SHOCK! HORROR!*

So tonight on Monday Musings w/The Jaded NYer and Friends, we're going to talk about the ins and outs of internet dating. 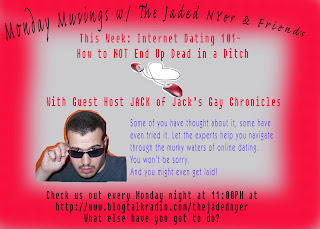 Because we know you all secretly have profiles out there, hoping wishing praying, like us, that you'll meet that one normal person in a database filled with narcoleptic, toothless, lazy-eyed crazies.

I hope to hear from you all tonight.

"Operation: Kill The Beast" A Success!
A bunch of things up and died in my fridge, and for a while me and the babies kept ignoring it. Until we couldn't anymore because whatever it USED TO BE dissolved into a nasty, liquidy mess that spilled all over the place, and the stench even penetrated the freezer.

And since I STILL don't have a wife, I had to just suck it up, put on a mask and clean that bitch out. Well, actually, I had the babies clean it out... it's time those heifers pulled their weight around here! Child labor laws my ass...

Now, my fridge is sparkly white and smells like clean. It makes the food in there look tons more appetizing than before!

You Can Go Home Again
Saturday I took K to the Citywide HS Fair. At Brooklyn Tech. Wow. It was emotional for me and I didn't really think it would be.

There were the staircases where JACK and I would start trouble, the cafeteria where we played spades instead of going to class, the downstairs gym with the elevated track where evil gym teachers would make ME run and run and run.

And the gate that locked the staircase to the basement area where the supply room was, the supply room that held all the theodolites and stuff us civil engineers needed for surveying in the park. (I could have sworn I heard Mr. Peemoeller yelling at me all of a sudden... how many paces to the first benchmark again?? *shudder*)

And get this fellow Technites: the Academy diner/coffee shop? STILL THERE!!! I totally almost cried tears of joy. All of a sudden I could taste the cinnamon raisin bagels w/ butter and jelly and hot chocolate I used to buy every morning instead of getting to first period on time. (Jeez... how did I ever graduate?)

ANNNNND- JACK... you'll never guess who's still teaching there... HOFTEIZER!!! I almost died when I saw his name in the directory... AAAAACK!!!

Damn, She's My Daughter Alright...
Nerd girls that we are, me and the babies were playing this game to see who could name all the U.S. States based on their postal abbreviations.

Both were doing pretty well, until K got stuck on WV.

She could not, for the life of her figure it out.

Finally, when I gave her the hint that it was "two words" she says: 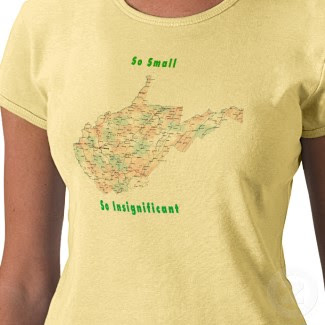 *smooches...hoping she doesn't talk like that outside of the home*
----------
what will people think of my parenting skills??