I Need A Bike, Not A Date. Thank You.

All summer I've been searching for the perfect folding bike to get me around the City so that I don't have to depend on cabs or trains or worse- buses.

Lani took me to one bike store where they were talking some $500 for a new bike, and I had to give the shop keep the one and only stank face. $500?? I can buy a whole car for that in Queens, so excuse me if I don't jump at the chance to pay out my ass for your over-priced bike.

I went to another bike shop in the East Village and same thing- $500 for the bike I wanted.

So I decided- I'm not above getting a used bike. I'm not looking to impress anyone, I just need some wheels.

I looked through the few ads for folding bikes in the tri-state area and responded to a few. One in particular, located in the West Village, was the size of a regular Mountain Bike and was only $150. SCORE! Except, no- he had already sold it. *bummer*

And here's where a routine email exchange turned into another episode of The Jaded NYer:

MY INITIAL EMAIL TO BIKE OWNER: oh please please please tell me this bike is still available! I've been searching forever, and I can pick it up any day this week after work, cash in hand.

HIS EMAIL TO ME: Darn, Wish I had seen your email earlier. You seem like the right person to have it..sorry

Nice name by the way

I WROTE BACK: aww... that's okay. Thanks for writing back (and for the compliment); some people wouldn't have bothered.

Pretty normal, right? Well last Wednesday, I get this message via Facebook:

"are you the same Raquel Penzo that was trying to buy a bike?"

To which I replied:

"Yes- which bike is yours and is it still available? (because I answered a bunch of ads)"

Hi Raquel, My bike was the folding Montague that was sold. I said you had a nice name. Just did a search for your name because I was wondering if you'd pop up. The reason I wished I had sold it to you, was because of your writing. It caught my eye, and I could tell you really wanted it. Little did I know you're a writer. Everyone else, I didn't respond to after it was sold. I'm in NYC editing a film for the next few months. If you're ever in the Village or downtown and want to grab a drink...let me know.

WTF? The folks on Twitter had a blast with this one, laughing at me and my new "stalker." I entertained meeting him for like half a second, you know, to kinda have an "in" for when I'm ready to work on my film, and because he might know John Cusack. But the consensus was: HE'S A PSYCHO. So I replied with:

I'm flattered that you went through all that, but will pass on the offer.

Enjoy your stay in NYC, and good luck with your film.

He has not contacted me- thank goodness- but why is it that I always get the online stalkers? Is it something I'm putting out there? 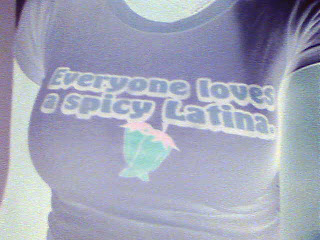 *smooches...still looking for the perfect folding bike*
----------
and another thing... dude has my number; I foolishly included it in my initial email to him, thinking I was sure to get the bike before anyone else... trust me- lesson learned!!
More genius from The Jaded NYer
Email ThisBlogThis!Share to TwitterShare to FacebookShare to Pinterest
Labels: A Life in Shambles, Big City Livin', Blanquitos, Latinos Rule, Ramblings, Romance? What's Romance?, VIP Hell Pass
Newer Post Older Post Home