Before I get to the post, I want to introduce you all to the newest addition to the Jaded family: 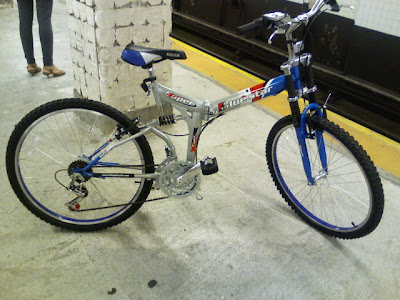 Her name is BeBe (pronounced like that Winans dude) and she's the bestest bike EVER! I had a helluva time getting her home, seeing as I can barely lift a sack of potatoes let alone a bike, but I did it and I love her and I can't wait to get my helmet so I can ride her all over Prospect Park!!

And can I also mention the cutie who was sitting next to me who was asking about the bike?? Very "Antonio Banderas" from Desperado, with an accent and everything... At first he was complimenting the bike. Then he wanted to know where he can get WiFi in the Slope. Then I stopped listening because I was picturing him naked.

He also told me where he lives (near the Avenue I stop) so maybe I need to ride BeBe down his block ala Ducky from Pretty in Pink...

OK, enough cyber-drooling. Let's get on with the show, err, post.

Man, I can hardly remember the last time I was out of NYC... oh, wait- yes I do! It was my trip up to MA with the BMW and the vomiting and the bungee jumping. Damn that shit was fun.

Anyway, that was hella long ago.

So I'm packing my shit and headed to DC to visit my baby sis; I need a fucking break from Brooklyn. I mean, I love this place, even more so now that I got BeBe, don't get me wrong, but sometimes, man, I just need to go!


Do you realize I've been living in this apartment since '06? My gypsy blood is itching to be OUT already- I can't sit still! That's why I force myself to take these lil breaks... to appease the gypsy. She wants to be out and about, and I gotta be reminding her, "Sweetie-pie, I need to work to pay the bills; I don't have time to go to Mystic this weekend. And NO we cannot go to LA this year so chill the fuck out; we will go in January as planned!"

So don't look for me in Greenwood this weekend, 'cause I'll be chillin in our nation's capitol, plotting on how I can get Mari to agree to moon the White House with me.

But before I'm out out for real, here's the flier for Monday's radio broadcast. And no, I won't leave y'all hanging this time; I have a standing shrink's appointment for the rest of the year every Monday so (hopefully) there'll be no more breakdowns!

Monday is the start of Hispanic Heritage Month, so we're pushing Jack's show to the 22nd and starting with Mari.. she and I are gonna shoot the shit about DR & Haitian relations, so you know you're gonna want to tune in. 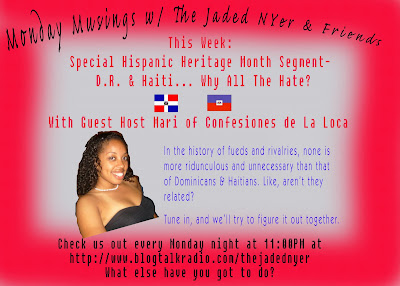 *smooches...so outta here that it ain't even funny*
-----------
there's something so soothing about being able to say, "I'm going away for the weekend." Ahhhh, I needed that so bad.
More genius from The Jaded NYer
Email ThisBlogThis!Share to TwitterShare to FacebookShare to Pinterest
Labels: A Life in Shambles, America the Bully, Baby I'm a Star, Big City Livin', DR vs Haiti, Humor, I'm Not Bitter, Mi Familia, Politics, The Writer's Life, Videos
Newer Post Older Post Home