You may or may not have heard that last week the powers that be in New York gave the green light to gay marriage. And right in time for the Gay Pride Parade 2011! 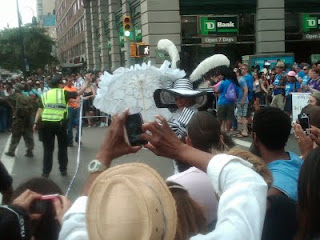 I have to admit- I loathe politicians and the tricks they play, especially for the shenanigans they are currently pulling with regards to what I can or can't do with my uterus and it's adjoining organs & contents, but this time they got something right. 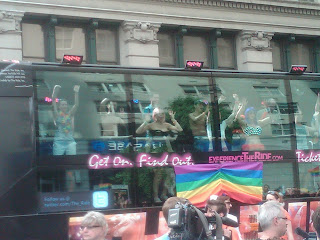 It's not a secret that Jaded don't do parades; crowds freak me out and I get real nervous if my exit strategy is blocked by mobs of people, but after checking out the afternoon screening of "Super 8" at Union Square, I found myself right smack in the middle of the festivities. 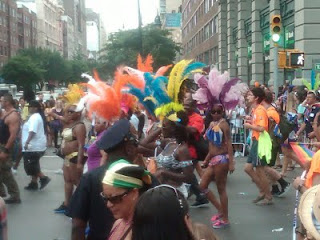 Never in a million years did I imagine I'd get swept up in the emotion of the day. It was all so beautiful- the cheering, the smiles, the music, the costumes. There was so much happiness and relief and love in the air...I may or may not have allegedly gotten a little teary during the procession. SHUT UP. 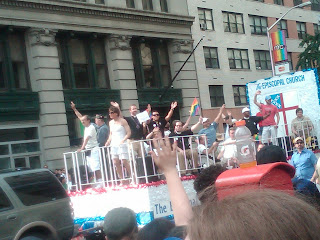 Today, more than I ever, I was an extremely PROUD NYer. I can't believe I was alive to witness this! 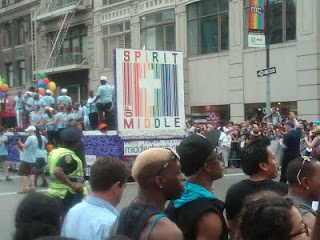 *smooches...for all of the same-sex couples lining up on Monday for marriage licenses*
---------
I kinda wish I can take off work and cheer them on at City Hall!
More genius from The Jaded NYer
Email ThisBlogThis!Share to TwitterShare to FacebookShare to Pinterest
Labels: America the Beautiful, Beautiful Things, Big City Livin', Good Shyt, Happy Happy Joy Joy, Jaded Moment In History, Photos
Newer Post Older Post Home