Apparently, I Have A "Princess" Mode...

...and it is to blame for all of my problems with men.

According to a certain source, while I'm fixed in Princess Mode, I talk to people as if they are a part of my Royal Court, there to appease me and basically do as I say. I use a certain tone of "privilege" and if I don't get my way I storm out and cut all communications for a random amount of time. Especially if the members of the Royal Court refuse to acknowledge that they are, in fact, supposed to be at my beck and call.

...been slapped with so much truth in MY. LIFE. 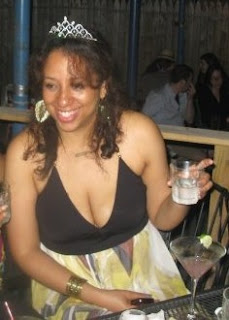 Listen, I'm very self-aware. You think I don't KNOW I have a Princess Mode? That my attitude stinks and I throw tantrums the likes no one over the age of three should ever throw? I. DON'T. GIVE. A. FUCK.

Know why? Because I AM a god damned Princess, and deserve to be showered with attention, affection and all that other good shit. I was raised to be a Princess and you know what? If you don't like it... ::points to door::

The sooner you men get hip to the fact of my Royal lineage, the easier this dating shit will be.

*smooches...waving from the tower of my Princess Palace*
----------
and what does it say about HIM that, even with my Princess Mode tendencies, he STILL wants me to be his MRS??? lol
More genius from The Jaded NYer
Email ThisBlogThis!Share to TwitterShare to FacebookShare to Pinterest
Labels: Baby I'm a Star, Humor, I'm Not Bitter, Revelations, Romance? What's Romance?, Tirades
Newer Post Older Post Home