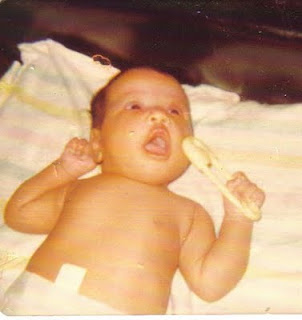 When I was a little girl, Mami would always hound me about my lethargy and general propensity to choose inactivity over everything else. I never understood why my body refused to listen to my brain and DO SOMETHING and the constant battle to figure it all out got to be pretty annoying.

While shooting the shit in Nina’s kitchen last weekend, I finally got my answer when Mami divulged the story of my birth.

I already knew that Mami was not at home while pregnant with me, but rather at a home for young women in Bay Ridge (thank you, Catholic Charities!) after having been kicked out of her home for being pregnant in the first place. According to Mami.

And I already knew I was born about two weeks past my due date; Mami had to be induced (OUCH! Sorry Mamita!!) because her 8lb, long-ass, fully-formed baby was not in the mood to make an appearance on time.

What I didn’t know was that during my birth there were complications that required the doctors to react hurriedly- examining my mom, taking X-rays and hooking Baby Jaded up to some oxygen in vitro...

...because for some reason, my lazy-assed fetus self decided to take a nap in the birth canal.

YUP. You read that correctly.

After the fact, doctors showed my mom the X-rays and there I was, curled up, chillin’ like a villain. According to Mami.

I don’t know about you but that opened my eyes and really, my whole life makes so much more sense now!