"Found The Remedy, I Had To Set You Free"

Those who follow me on Twitter know that on Wednesday morning I had the pleasure of being only a few feet away from Maxwell while he performed some songs for the CBS Early Show.

True story: I was introduced to his music back in college when Celia (my roommate for you newbies) bought the CD; I think we were sophomores but I can't remember. We played it over and over it was so damn good. Like every freakin song was THAT GOOD. And then when the video came out for Ascension I was all like HUMUNAHUMUNAHUMUNA and just in love... y'all know I love me some Bohemian men! I mean the hair, the voice, oooh he was so smooth!

Fast-forward to just a few months ago, I let myself be convinced that he didn't play for my team, and that his new haircut (which debuted on BET like a year ago) ruined the whole vibe I'd fallen for. And even though his single "Pretty Wings" was so beautiful and just classic Maxwell, like enough to make me love him again even though the hair was gone, the rest of the CD left me all BLAH because only three songs on there caught my attention. I was so ready to write him off.

I'm happy to report that he and I are in love again. We've patched things up and plan on renewing our vows real soon. 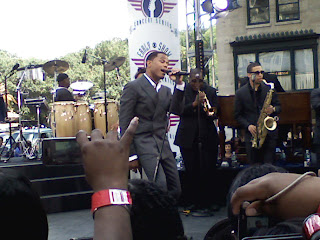 And speaking of exes... I suppose I didn't get the memo that was clearly sent to mine, reminding them to pop up at the weirdest places and just slap me awake.

Like when I showed up at ShellyShell's party and saw The Haitian on the one's & two's. WTF? Really? So I'm just expected to bump n grind all night with that jerk spinning the tunes? I can't tell you how much alcohol I had to consume in order to force myself to ignore the fact that his dreads were looking SEX-AY all down his back n shit.

Or, just Wednesday, when, as I sat and enjoyed a late lunch with Eb & The F$%k-It List, Navy Guy just strolled by our table with his new chick. REALLY, Universe? Like for real you're just gonna have him walk by my table with his broad shoulders and washboard abs and those LIPS (LORD THOSE LIPS)... and some skinny white chick on his arm? REALLY?

I swear if I run into Cali Dude or Mr. Baseball this weekend I'm punching somebody in the face because this cannot be my life.

Dear Exes: When I'm through with you, you're not supposed to stay good-looking NOR are you supposed to even still exist. You're supposed to disappear so I never have to be reminded of what it was like to wake up next to you the next morning.

Maybe I just need to get the hell out of Dodge? Could it be that I've fucked too many NYC dudes?