It All Boils Down To Intent

Back when I was married, right before we left the Bronx for the so-called greener pastures of Pottersville, NJ, I pulled a knife on my then husband, C.

Wait, let me correct that- I went at him with a knife. 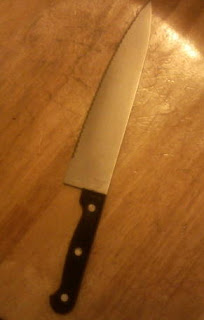 Prior to that incident we were on the verge of breaking up because of his tendencies to seek sexual enjoyment outside of our marriage. We spent a year in therapy supposedly learning to communicate better with one another so that we could save our marriage and our family. He swore he was making a real effort and was committed to our relationship and I believed him and agreed to do the same.

One day, something drove me to do some internet detective work and VOILA! I found more evidence that he was STILL up to no good behind my back. It was the proverbial last straw. I ran to the kitchen to get THAT knife and in rage that was fueled by this strange fire in my gut I stabbed at all of his clothes which were minding their own business in a laundry bag on the floor.

Then he came home.

I was sitting there on the floor, knife in hand, liquor in my system (oh you better believe I downed a few drinks!) and fire still in my belly. He rushed the babies off to their room and then came back.

Just the sound of his stupid voice made me so angry, so unbelievably feral, that in one swift motion I got up off the floor and, knife in hand, lunged right for his throat. Not his face, not his chest not his dick (as some women are wont to do). Nope. I wanted the jugular. I wanted to hear him gurgling blood with fear in his eyes so that I could stand over him and say, "I told you not to fuck around on me again." That was my intention. As scary as it is to admit that right now for all the world my 22 readers to see, that is what I wanted at that point in time.

Had I succeeded I could have easily gotten murder one. Why? Well, I just learned why from being on a jury for two weeks: intent.

And this is why I preface my story about jury duty with a story about how I almost killed the father of my children, because I need you to understand how intent has kept me up at night for the past two weeks, restless, depressed, overwhelmed, troubled and traumatized.

The murder case to which I was assigned involved a young Latino, Fernando "Macho" Claudio who fatally stabbed a young Black male, Hewitt "Gus" Hester, at a party in 2007. Charges against him also included assault on three other individuals: Ramon & Eddie Santiago and Michael Smalls.

From the evidence and testimony we, the jury, heard, the sequence of events was something like: Macho & Gus had an argument in the hallway outside of Ramon's apartment at around 5AM after a party was winding down. Witnesses say they don't know what started the argument, Macho says Gus did.

At some point after this argument takes place, where, mind you, a punch or two is thrown, the melee is thrust back into the apartment. Once inside, Macho retreats to the farthest corner of the apartment where the others follow and the fracas continues. Witnesses say they see Macho punch Gus in the chest; they also say Gus turns to them and says, "I'm hit. He stabbed me" or something to that effect. More punches are thrown, someone hits Macho with a beer bottle, he continues to stab and gets Gus again in the arm, Ramon in the left hand, Eddie in the right hand and Michael twice in the back of the head.

Now mind you, I'm oversimplifying because I'm not in the mood to make this a two-or-three parter. Please keep in mind that we were not able to determine who was stabbed first; this is just a broad picture of the case, so pay attention.

Macho eventually runs out of the apartment and even though he is chased by the Santiago brothers is able to get away, while Gus bleeds to death in his nephew's arms.

What we as jurors had to decide was did the prosecution, ADA Chu, prove to us beyond a reasonable doubt that:

1- Macho is guilty of 2nd degree murder, meaning he stabbed Gus with the INTENTION of killing him. Or

2- Macho is guilty of 1st degree manslaughter, meaning he stabbed Gus with the INTENTION of causing him grievous bodily harm which could naturally, probably lead to death. And

3- Macho is guilty of 2nd degree assault on Ramon, Eddie and Michael. Those were three separate counts.

Deciding the murder/manslaughter charge was not difficult. Although it pained me to send such a young man- 23yrs young- to prison, he sealed his fate when he pulled out a weapon in the middle of a fistfight. The defense argued that the others were ganging up on him and he felt threatened. While that may be the case, we'll never know, Macho escalated the situation by no longer depending on his fists and choosing a sharp object instead.

We found him guilty of 1st degree manslaughter.

Why not murder? Because the ADA didn't prove her case, simple as that. It could very well be possible that Macho brought that knife with him and was gunning for Gus because they had beef just prior to the stabbing. But she didn't prove it. In good conscious I could not convict him of murder without that proof.

But, because Macho himself took the stand and gave me one crucial piece of information I was able to wholeheartedly cast my vote for guilty of 1st degree manslaughter. He told us that after he was pushed back into the apartment following the hallway argument, he took off his glasses and walked all the way into the corner of the living room- the farthest location from the front door. That tells me Macho was ready to fight.

Whether or not he had the knife in his pocket as the witnesses claim, or he found a sharp object on the windowsill in a moment of desperation as Macho claims, the fact remains that he went back into that apartment ready to throw down and settle whatever score he felt the need to settle. Because he took of his glasses, much like a female would take off her earrings before fucking a bitch up. He took off his glasses to prepare for the fight.

And the idiot sealed his own fate when he said that on the stand.

Now what has kept me up at night is that word INTENT. Because I knew first hand what it felt like to really want someone dead. And thanks to this case, now I really know what a dead body looks like, laying in a pool of its own blood.

And every night I was tormented by the thought of, THAT COULD HAVE BEEN C IN THAT POOL OF BLOOD. And I tried to feel some sort of kindred-ness with Macho but I couldn't. And that made me angry and sad, as if my empathy and humanity were slipping away. Because this young man took the life of another young man and now it was my job to take HIS life away and send him to prison. Although of course one could argue that he sent himself to prison by using that knife, still, it was we, the jury, who gave the go-ahead.

It pains me to know people are really like this. I mean you read about it, see it in movies, hear about it in the news, but this was so real that it truly hurt me deep. This violence, the aggression towards our fellow man, this disregard for life. This is the world I'm raising two daughters in? This is it? Really?

I cried almost every night I was on jury duty and I'm still all teary as I write this. Because frankly it just hit me: this is the world I live in.

If I wasn't truly Jaded before, please trust that this murder case has sealed the fucking deal.

*smooches...so glad I won't be called again for another eight years*
----------
it will probably take me that long to get over THIS one!
More genius from The Jaded NYer
Email ThisBlogThis!Share to TwitterShare to FacebookShare to Pinterest
Labels: A Life in Shambles, America the Bully, Bellevue Calling, Big City Livin', Death...YUCK, Law n Order, Revelations, The Voices, What a Sad Sad World
Newer Post Older Post Home