Yes, Sometimes It Is Hard To Be A Mets Fan...

If you don't know what he's talking about, it's the fakakta patch the Mets have added to the 2009 jerseys to commemorate the new stadium.

Critics are comparing it to the Domino's logo and I can't even blame them... look at this mess: 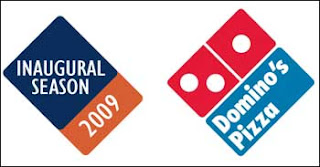 And look at the one the Yankees came up with: 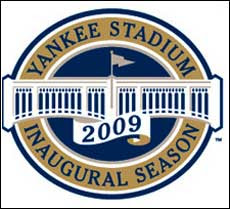 As if Yankee fans aren't already the most arrogant, obnoxious, boisterous and irritating people on the planet, now we have to deal with this bullshit.

I feel like this patch is a test of my loyalty. Well, I ain't going nowhere, not after years and years of losing, not after sticking us with Minaya, and definitely NOT over some stupid patch that will only be on the uniforms for one season.

I'm not that kind of fan. I started with them, I'll finish with them, wherever that road may lead... I'm ride or die for them fools, god help me...

But quietly, how much do you want to bet that Minaya is behind this? OOOOH, I HATE THAT MAN!!!!!!!

*smooches...still a Mets fan, through and through*
----------
nothing will ever change that... I'm like the musicians on the Titanic with this team... I'm going down with the ship if I have to!
More genius from The Jaded NYer
Email ThisBlogThis!Share to TwitterShare to FacebookShare to Pinterest
Labels: Big City Livin', I'm Not Bitter, In the News..., Just Jack, On Blast, Photos, Sports
Newer Post Older Post Home