What Can I Say?

Philadelphia beat us fair and square.

I'm not going to say "the Eagles wanted it more" or "it's all Plaxico's fault" because that's what sore losers say. And true, I took the anger and frustration out on my couch with such ferocity that my babies ran and hid in my bedroom, but I'm okay now. And sure I googled Eli to see where he lived to maybe perhaps pass by with a led pipe but, nah, I'm okay now.

It's just a football game, right? The fate of the world doesn't depend on it, right? Except for the loss of bragging rights, a Giants debacle doesn't affect my world.

That said, I refuse to talk sports until March 6th when Team Dominican Republic plays The Netherlands in Puerto Rico at the World Baseball Classic. Carry on.

Now on to better news:

Remember that book, Men are from Mars, Women are from Venus? And how it discussed how differently men and women communicate, react, behave, etc? I didn't read it but I read the jacket (self-help books make me vomit!) so I only got the gist of it.

Anyways, I decided to have my own little version of it on Monday Musings- Mars vs. Venus: A Conversation Between Heterosexuals. And I specify heteros for this segment because OF COURSE I'll be doing one later on for my gays (I stole that phrase from Kathy Griffin... Where my gays at?!?! lol). 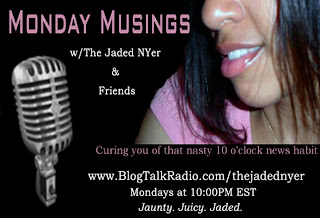 I want an open dialogue between men and women, marrieds and singles, to see if we can't get back on track with one another. I've noticed that many of the singles in blogland seem to have real problems meeting really good mates, and it baffles me because all the bloggers I visit seem to be nice, intelligent, ambitious and beautiful people. So what's the problem?

Lets find out together, shall we?

And my co-hosts tonight: 12kyle & Eb the Celeb... and if you've ever read either of their blogs, you know they have a lil faux feud going on that will make this segment SO MUCH FUN. In fact, they've already begun trash talking via email, so I can only imagine what tonight will bring!

In the meantime, feel free to add any questions/comments you may have for the opposite sex in the comment section, and I'll try to bring it up during the segment tonight.

Be there or be SQUARE!