"One Of These Kids Is Not Like The Other..."

Why was that the song that popped in my head when I saw this picture? 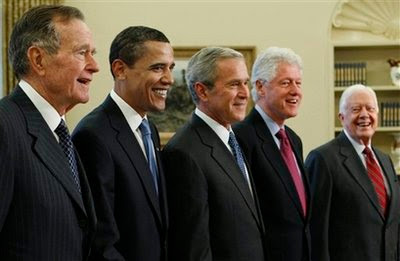 Look at them, all smiles n shit, like Clinton wasn't trash talkin Obama during the primaries, like Bush Sr. ain't hatin on Clinton's smug ass, like Carter even knows what day it is, like Bush Jr. ain't counting down the minutes til he can go watch Spongebob Squarepants and like Obama isn't as high as a freakin kite wondering where he can score some Cool Ranch Doritos right quick (weed lips, people, I keep telling you...)!

I see this picture, and instead of thinking, "Wow, look at my former leaders with the future President" I'm thinking of that SNL Cartoon, The X-Presidents!

Oh please, Mr. Smigel, PLEASE have an episode planned for after Obama takes office... I NEED to see that episode!!!

*smooches...bringing "inappropriate" back...*
----------
it's okay, tho, I live in America and I can make fun of any elected official I want, past or present. watch me!
More genius from The Jaded NYer
Email ThisBlogThis!Share to TwitterShare to FacebookShare to Pinterest
Labels: America the Beautiful, Blanquitos, Humor, Musings, Negritos, Photos, Politics
Newer Post Older Post Home