***SORRY, BUT DUE TO ILLNESS, THIS SHOW HAD TO BE CANCELED. STILL LOVE YOU, THOUGH!***


The first time I voted was in the most recent presidential election...and look how GREAT that turned out *rolls eyes* Still, I'll be at the polls again tomorrow because for New York it's a biggie- we're choosing a new governor. And I don't know about the rest of the state but Paterson gets on my DAMN nerves and chances are he won't be getting any support from the Jaded Empire.

So of course tonight's Monday Musings is all about VOTING and the many reasons why you should with our fabulous co-host, The F$%k-It List. 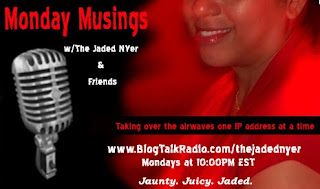 Listen, I used to be like you, apathetic to the Washington machine, preaching the whole, "my vote doesn't make a difference" schpiel but UGH! I gotta voice my opinions on term limits AND get that lame duck Paterson out of Albany before he destroys my home state!

Won't you tune in tonight, and spread the word to your non-voting friends? Gracias!!