My Spades Game Is A Tad Rusty...And Other Musings

I know you miss reading my weekend updates almost as much as I miss writing them, verdad? Well, here you go my lovelies! Don't ever say I never gave you nuthin...

Three And A Half Hours Too Long
On Friday, after a full day of actual work, I went to Lincoln Center to see this film at Latinbeat (a festival of films from Latin America) called "Extraordinary Stories" that was...wait for it...FOUR HOURS LONG. Between you and me, it didn't need to be. They could have told that story in 30 minutes and let us go on our merry way. But noooooo, the filmmakers--devils that they are--decided to tell the story like a novella, in 18 boring, mind-numbing, NARRATED chapters with TWO intermissions. INTERMISSIONS!!!!

The last movie I saw that was 4+ hours and had ONE intermission was Gone With The Wind, but I mean, the story was Epic. It could have easily gone 6 hours and I would not be mad.

But this piece of shit I saw on Friday, UGH, let's just say "many naps were had."

Rethinking This Baby Thing
Remember how I said I wanted another baby? Well, you can thank Miss Olivia and her cute little squooshy face for causing me to have second thoughts. She's 3, which means by definition she's INSANE. And Chatty. And she wet herself at the park and thought nothing of it. 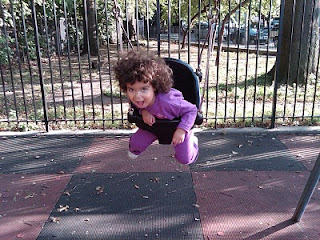 And then she threw a fit because I beat her in Wii Cycling and Sword Fighting.

Yeah. I think I'm done having babies. Now excuse me while I rip out my uterus.

My Spades Game Is A Tad Rusty
OKAY. So I lost the game for me and my partner. There, I said it. I wasn't paying attention, didn't see which card he led with and ended up cutting him which set us for the round. IT WAS MY FAULT.

Now that that's out of the way...I totally remember why I stopped playing Spades. Y'all be taking it too seriously, shoo! I mean this dude actually got up and left the apartment to have a smoke and cool off because I cut him. SHEESH. It's just cards, homie, not the missile codes. Everything will be alright!

"Yo, Check This Out, Tho..."
By far the funniest shit I witnessed this weekend was some dude having an argument with his girl over the phone. I mean, I can only guess what she was saying but his side of the conversation was more than enough to have me chuckling my ass off for sure.

Highlights include when he got up out of his seat with a "Yo, check this out, tho..." and got in a fighting stance while he listed all the things she needed to check out, AND when he finally yelled into the phone, "But where's the panties, tho? Where's the panties??" Pure Comedy. $50 says he got caught out there...

Side note: what was really the point of that entire display? Arguing, especially over the phone, is such a waste of time and energy. Please don't ever be that guy (or girl) causing a ruckus all in the street. Please.

You Know You're Smitten When...
...you spend most of your Sunday running THEIR errands with them. By choice.
...traveling 2hrs out of your way to see them in the wee hours of the night when you're drunk and tired seems like the only way to spend your night
...parting is such sweet sorrow
...you find yourself quoting Shakespeare
...your once roomy & spacious bed seems too big and too cold. And empty.