And I Wonder Where I Get It From...

HAPPY NEW YEAR, BITCHEZZZ!!!
I hope you all spent it with good people having a good time in a good (spiritual) place, and made it back home in one piece.

My initial New Year's Eve plans for the evening were very lofty: Netflix. Take out. Couch. There was also the possibility of a few parties throughout Brooklyn. But then Mami decided that no, we were going to my Tia Nancy's house to ring in the New Year and while I was iffy about it at first I'm sooooooo glad I went.

Tia Nancy is William R. Penzo's sister; she's older & has a different father which explains why she's the only one on that side of my family that I love- she's technically NOT a Penzo. So because she's not infected, err, does not have Penzo blood running through her veins her kids, by default, are also pretty cool. See, look at them: 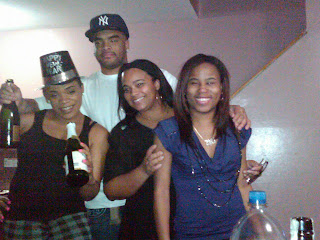 Don't they look cool?? (Ignore the liquor bottles; they grew up in BedStuy then Brownsville- whattaya want?!) And PS- The boy cousin in the pic just had the CUTEST baby girl in October. I met her tonight. OH MY GOD I want to steal her so bad!

Anyway, so we get there and it's not the packed to the gills house party I remember Tia Nancy having back when I was a kid. It was just us, my grandmother, my cousins and their kids and my Uncle Dino. And I can't even get into Dino right now. He needs his OWN blog post. Let's just say that stories were circulating about him wearing rollers in his hair & tight shirts & roller skates in the streets of NYC. I won't elaborate past that.

Then Dino left with my grandmother because apparently William R. Penzo was hosting his OWN party out in Bushwick, so *WHEW* I was not going to have to see that man at all. All my fears of confrontations and awkwardness just disappeared. So then it was just us. And that's when the fun REALLY began.

When I say fun, I mean the STORIES: that my Penzo grandmother was "loose" when she was younger (8 kids by 3 different men, the last one being MARRIED...don't sleep on my grandma, y'all!) and my uncle's cheating ways; about my very gay cousin and his very in-denial mother; about the mental illness that's running rampantly unnoticed and undiagnosed in certain cousins; and my brother, who is shaking up with some cougar.

I tell you, I could not have written better shit than what I was privy to tonight- it was all comedy GOLD! Honestly, if I wanted to tell all these people's business and elaborate on everything that was said tonight, I'd have enough blog posts to last me through the end of March. Seriously. But I won't take it there...I think this snippet was enough.

The star of the show was definitely my cousin's husband, Moe. Yo, dude had me and my sister in TEARS the whole night! He's is crazy funny; I wish y'all could have experienced his nuttiness live and in person. Here's a glimpse of it: 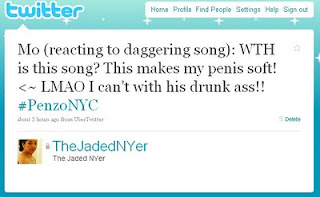 Suffice it to say I gave my non-Penzo cousins my phone number. And who knows? I may even share this blog with them one day. Alls I know is I have to find something else to call them, because of everyone in that house tonight, I was the only real Penzo in attendance.

I'm still trying to decipher if that's a good or bad thing.