That's what the manager of my local supermarket kept saying to the young lady (and I use that term lightly) whom he'd caught shoplifting. A petite, meek-looking Indian/Muslim girl from the neighborhood.

"Please, sir, PLEASE!" She kept pleading with him. She wanted him to give her a pass, claiming she'd learned her lesson for real and her parents need not be involved.

"I don't care. You need to learn a lesson. Call your parents."

And then she said something to the effect of, "I'm trying to learn. I'm trying!" (At least I think that's what she said.)

But he wasn't trying to hear anything she was saying. He wanted to speak with her parents. "I don't care," he said again in his thick Haitian/African accent. "Call your parents."

I had to go into the subway at this point in their conversation, even though I desperately wanted to follow them into the market to see how it all unfolded, so I can't tell you what happened next. But that didn't stop me from imagining how this MIGHT have played out.

Would her parents be called? And, knowing Indian/Muslim families the way I've come to know them since moving into this neighborhood three years ago (and gauging her fear level) would they beat her at the store or wait until they were behind closed doors? This is America after all, as I'm sure they've been made painfully aware, and the few Anglos scattered on the block are the type to call the police while us colored folks wold likely stand around watching, some even offering leather house slippers or belts for the cause.

Or would the manager take pity on her? Fall for her tears and accept that she has, in fact, learned her lesson? And what, if anything, will she take away from this scenario? To not steal or not get caught? Will she learn to respect authority figures or develop a misplaced hatred/mistrust of Black people?

But more importantly, I found myself wondering over and over as I rode the F into the city: What made her steal in the first place?

Readers- I'm trying to understand this mentality, especially because I have a new teen and in order to stay out of Riker's I've been analyzing a bunch of "gone-wrong" kids and what made them "go wrong" in the first place. I'm trying to prevent a meth-addicted K or a prematurely sexually active N. 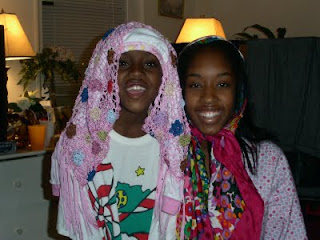 I believe their father and I have given them a good foundation of expected and tolerated behaviors, and instilled in them the tools and encouragement and support to be successful and happy. But I'm sure Whitney's mother thought the same thing, and the Houstons even had GOD in their lives, which my daughters do not, and still Whit-Whit was hittin' that pipe something fierce.

No one wants to think it will happen to THEIR child but there are millions of kids doing drugs and sleeping around and joining gangs and DYING of self-destruction all over the country. What's to say it won't be mine (besides my belt, of course)?

*smooches...trying not to get too anxious about this*
----------
but seriously- LORD help these heifers if they don't stay on the straight and narrow. LORD. HELP. THEM.
More genius from The Jaded NYer
Email ThisBlogThis!Share to TwitterShare to FacebookShare to Pinterest
Labels: A Life in Shambles, America the Bully, Babies, Just Say No, Mi Familia, Ramblings, Tirades
Newer Post Older Post Home