These are excerpts of what I wrote in my journal during the very long bus ride to Massachusetts last weekend. We were stuck in hours of traffic and I was trying desperately to not go crazy(er) so I pulled out the pen & paper.

It's rather hard not having anything spiritual in my life, especially now that I've decided to stop faking the faith. Naturally, I've been looking for signs constantly, a message from anywhere, to tell me what to do. And since I've been escaping with music...that's where I've been hearing these messages.

Like Biggie telling me to "get a grip" or Dave Navarro telling me that "there is no love left in [my] eyes" or even Alanis telling me I reduce her to "cosmic tears." (And btw, she also asked me to help her solve the world's problems. I found her fast & outta place for that one. How is putting the world's problems on my shoulders an effective way to help me find god?) 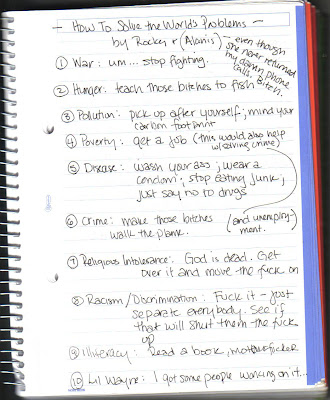 Then Nas came along to remind me that people need someone to believe in and I was like, REALLY? GOSH I HADN'T REALIZED THAT ALREADY.

Billy Joel jumped in the mix next, telling me to pace myself because I'm just like everybody else and that I cannot handle pressure. Wow. Knife. Deep. Thanks.

(At that moment I was reminded of Halle Berry in "Things We Lost in the Fire" when she tells Benicio's character that she doesn't know when she'll ever feel beautiful on the inside again, as well as the scene in "Say Anything" when Lloyd asks his sister: How hard is it to get in a good mood and stay there? UGH! I had to fight the tears real hard; didn't want the nosy biddy sitting next to me to ask if I was alright.)

Hi, my name is Raquel, and I suffer from Depression...can you all please be nicer to me?

GREAT! Why did this billboard just ask me if I was going to Heaven or Hell? Motherfucker, I don't know! Can I get to South Station first and decide later? Get thee behind me, Christianity!

The Cranberries' Delores came in with the save, though- told me that I'm free to decide, and then Santana & Will.I.Am wanted me to know that I am somebody, that I should live my life, be myself, because I'm somebody special and somebody loves my life. They said they could see me shining bright.

Can music be religion?

Finally, Jay-Z (and The F$%k-it List) told me anyone who's not feeling me just doesn't exist (those sons of bitches) right before The Sounds reminded me that regrets are useless.

And with the battery on my iPod dying and my ears ringing from 6hrs of straight music listening, I shut my book and rested my eyes.

And that's how I entered my weekend in New England. With all those thoughts in my head.

*smooches...still looking for a sign*
----------
but the music was a real good start I'd say.
More genius from The Jaded NYer
Email ThisBlogThis!Share to TwitterShare to FacebookShare to Pinterest
Labels: A Life in Progress, A Life in Shambles, Beautiful Things, Bellevue Calling, Entertainment, Musings, Ramblings, Religion-Schmeligion, Revelations
Newer Post Older Post Home