How Shall I Find [Its] Where?

That's a line from Bram Stoker's Dracula, which I've been reading this month (YES, MONTH! Because that shit is a BITCH to get through... the writing is so dense, yet beautiful. And the suspense, even though I know what happens, is brilliant. I'm so in love with this book I don't want it to end EVER!) that has stuck with me the minute I read it: How shall I find [its] where?

In the book, obviously Van Helsing is talking about looking for that dastardly count, but for me it meant something else. I mean, I'm reading this book, right? And these men + Mina Harker are determined to rid the world of Count Dracula in memory of dear, sweet Lucy, whose soul almost didn't make it to the pearly gates. And it made me think- would I work that hard to find anything for anyone, ever? And THAT made me think- the only thing I want to find that badly is whatever it is that makes me feel, well, for lack of a better word, bad.

So some of you know that a while back I watched (and re-watched) this film on Netflix, Something is Killing Tate, and it hit kinda close to home; so much so that every time I watched it I always walked away from it with something new (you can read my Jaded Movie Review here).

Basically the lead character, Tate, is depressed and suicidal (sound familiar?) and during the course of the film has to face his demons or lose his will to live for good. After about the third or fourth time watching it, I came to the conclusion that Tate and I had the same problem:

I'm not sure I know how to love or be loved or show love or allow love into my life. Not for real anyway. I know how to go through the motions and say all the right things at the right time to feign love. But real love? What the hell does that even mean?

And you all know this to be FACT because I've said so, on this very blog, MANY, MANY times. Hell, I even got this nifty T-Shirt to prove it: 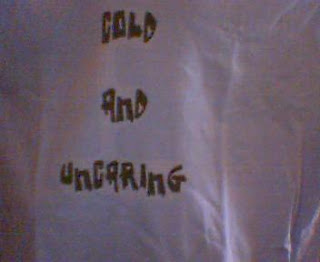 You know what else I concluded? How hard have I been fighting against the cliche that part of the reason I'm fucked up is because my father abandoned me, only to find that goddamn it, it's true?

How many times do I need to fall apart and become self-destructive after things blow up in my face before I accept the fact that William R Penzo did have a huge impact on my life, the likes of which not even Papi's love and guidance could protect me from?

And how long before I admit that all I ever wanted was for him to want to be in my life? To want to be my dad? To want ME? Like for real, people, WHY DOESN'T HE WANT ME?
To add insult to a hurt little girl's injury, (and here's where I reveal something that would probably make my mom disown me, again) do you know that when I was younger, my mother told me she didn't want to go through with the pregnancy but didn't have a choice and HAD TO have me? What did she think that would do to me? Why would you ever tell a little girl- who doesn't even have a daddy's love- that you didn't want to give birth to her? Who does that?

It's no wonder I'm a fucking mess of a human being.

And I'm not here to villainize (yeah, I made up that word. AND?) anyone or point fingers. Everything happens for a reason, and William and Mami must've had their reasons for doing what they did. And along the way I made certain choices down the path of no good that I could've avoided and blamed it on my fucked up childhood so I'm not all innocent.

But still, I really just had to stop lying to myself and admit that YES- what happened to me as a child affected who I became as an adult. All the blame is not mine, only about 65% of it. Because how can one be expected to make the right decisions when one isn't armed with the right tools in order to do so?

Good thing for me I'm soooo self-aware, and still young enough to try and repair the damage (how's THAT for a backdoor compliment, huh?). Do I look forward to confronting my parents? Um, hello... did I not mention that they're DOMINICAN? I fully expect a chancleta across the face for even bringing it up. But still... shit needs to be said. I'm just saying...

In the film, Tate gets to speak to his younger self; what I wouldn't give for one more shot at mine. I feel so mad and useless because I couldn't protect Little Raquel from all this and make her life better.

*smooches...vowing not to watch that film again for at least a year or two*
----------
it's almost like I was looking for a reason to drink the Windex...
More genius from The Jaded NYer
Email ThisBlogThis!Share to TwitterShare to FacebookShare to Pinterest
Labels: A Life in Shambles, Bellevue Calling, Death...YUCK, Entertainment, I'm Not Bitter, Memories, Mi Familia, Revelations
Newer Post Older Post Home