I'm Strong When I Have To Be. We All Are.

The only good thing about staying up too late trying not to give in to a nasty bout of night-eating, is that once in a while you'll catch some good updates on The Twitter. There's something about the end of the day that makes us have these A-HA! moments, and for all the foolishness that happens online, sometimes twitter can provide some good food for thought, like the one listed below.

Because Shanelle's tweets were posted after 1AM, I don't know if many people were up to read them, so I'm posting them here (read from the bottom up; I'm too lazy to cut and paste everything in order for you!): 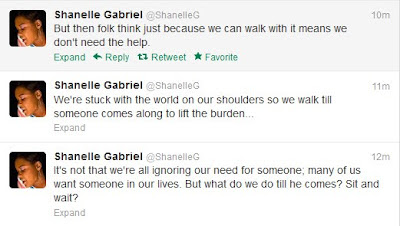 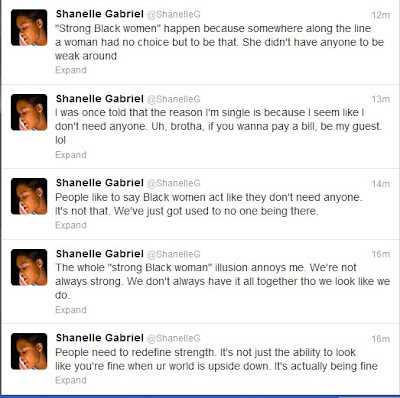 Everyone has had something to overcome in their lives; something that's made them put on their grown folk's drawz and put in work. To point a finger at someone who is taking care of their business, blaming them for others' insecurity, that's just counterproductive to the struggle. We're single because we're too strong and appear to not need a man? GET ALL THE WAY OUT OF HERE WITH THAT BULLSHIT. So if I were on public assistance, sitting at home desperately putting up sexy bathroom pics of me on Twitter and Facebook for attention, I'd be married by now? Honestly, I don't want a man who is attracted to that kind of woman, because clearly he's looking to take advantage of her somehow and possibly harm her and her children.

Yes, I pay all the bills at home, take care of my kids, have a good job, create great things as a side gig, am highly educated, opinionated and judgmental. My ideal guy will be all of that and then some, and appreciate those attributes in me. If that's not your scene, please, feel free to move the fuck on. You're blocking out the sun with all your hate.

*smooches...tired of ppl telling me why I'm single*
---------
the fact is, I'm single because I CHOOSE TO BE. deal with THAT!
More genius from The Jaded NYer
Email ThisBlogThis!Share to TwitterShare to FacebookShare to Pinterest
Labels: America the Bully, I'm Not Bitter, Lies The Internet Tells, Mis Amigos, On Blast, Twitter, What a Sad Sad World, WooSAH
Newer Post Older Post Home