(I'm hoping that title will get picked up on Google search and then all his syzzurped minions will leave nasty comments on my blog, like, "You're a hater" and "Let's see you spit some rhymes" and then they'll start calling me all manner of bitches and tell me I'm old and ugly. To which I will reply, "And?")

Last season on Monday Musings, I featured parts one and two of The Evolution of Hip Hop to rave reviews. (What? The Voices told me the shows were fuckin' awesome! Shut UP!) If you missed those segments be sure to catch part one here and part two here.

And TONIGHT, tune in for The Evolution of Hip Hop, Pt. 3: Did Lil Wayne Kill Hip Hop? 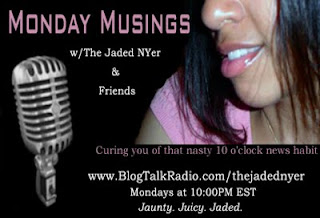 Oh yes, I'm taking it there... calling out His Majesty the King Of Fraggle Rock himself because, you know, he's gangsta. And if you didn't know he'll be sure to mention it at least 20 times within the first 10 minutes of you meeting him. Because he's gangsta. But no worries- the whole show is actually not about the Fraggle-meister but rather the era of Hip Hop that followed gangsta rap: the trendsetters and such that popped up and either stayed or faded away after the whole east coast-west coast feud was LITERALLY buried (RIP Biggie & 'Pac).

My guest host tonight is MC K~Swift of the New Rap Order/Universal Zulu Nation, so make sure you tune in, ask us a bunch of questions, or just call in with your favorite hip hop memory from the late 90's to today. All the cool kids will be listening...

*smooches...eagerly awaiting the fraggle stans & their comments*
----------
and don't forget to weigh in on the poll... did lil wayne kill hip hop? Or is El Generalissimo an old fuddy-duddy hater who still rocks out to Nice n Smooth?
More genius from The Jaded NYer
Email ThisBlogThis!Share to TwitterShare to FacebookShare to Pinterest
Labels: Baby I'm a Star, Blog Talk Radio, Entertainment, Good Shyt, Interact With Me, Soapbox Blues, The Voices
Newer Post Older Post Home