Have you ever heard a song on the radio that you kinda dug, but not enough to look up the artist and become a fan? Everyone you know is really into this person- including the critics- and you see and hear them everywhere: collaborating with big-named artists, touring, appearing on late-night talk shows. Still, you only kinda dig that one song and don't feel the need to check this artist out.

Then one day you happen to catch them live and your entire position changes. Their energy, rapport with the crowd and ability to perform their ass of- it all changes your mind. All of a sudden you want to get your hands on everything they've ever recorded and you need to know all the words and lets face it- you want to be this artist's BFF.

That's what happened to me when I saw Estelle in concert on Friday. 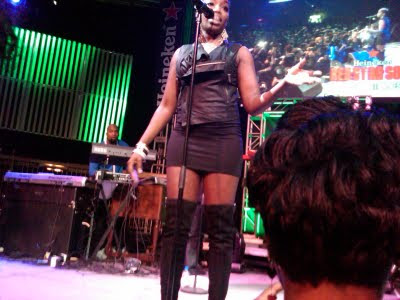 And if you've never witnessed her awesomeness in person, get on that post haste.

Estelle had something that I covet so badly- stage presence. Well, that and a killer body and a great voice, but mostly it's the stage presence I'd like to steal from her.

When I envisioned myself as a writer, I pictured a life similar to Johnny Depp's in Secret Window, except without the murderous psychosis. Okay, maybe a little murderous psychosis, but not a lot. I thought I could just write from a little hideaway in Brooklyn, mail in my work and my agent would handle all the non-creative tasks.

But the deeper I delve into this writing life the more I realize that that is not a possibility. Do you know that I hardly knew what Stephen King looked like until I got older? Or Judy Blume? And I still don't know what the hell Lois Duncan looks like, but all of them made a great living as authors without being in the public eye. Today, however, in order to promote your work and generate interest you have to make the rounds: book store readings, panel discussions, maybe even a morning talk show and weekly magazine pieces.

But whatever happen to the dream of being a recluse? The motto of, "I'd like people to know my name not my face" I created for myself years ago? Is it this new "connected" world we live in? Is it no longer en vogue to hide behind my typewriter in last week's pajamas and last month's funk?

Why must I now think about public readings and networking events where I have to "be seen" and "sell myself" (not like THAT, pervs!). I'm not a boastful person by nature, and if given a choice I'd much rather sit in a corner of my bedroom watching Buffy the Vampire Slayer DVDs on my new netbook than schmoozing with people who may know someone who knows someone who knows someone who'll publish my work and pay me a tidy some for it. Isn't that the agent's job?

I know, I know. I'm being a whiny-faced baby head. I'll stop.

Still, someone help me out here: how do I get my hands on some of Estelle's stage presence? Don't make me snatch a strand of her hair and visit the santero...

*smooches...terrified of being recognized in the crowd*
----------
I don't know about you, but my feeling is- once you stop being able to blend in with your surroundings that's when all the trouble begins...
More genius from The Jaded NYer
Email ThisBlogThis!Share to TwitterShare to FacebookShare to Pinterest
Labels: A Life in Progress, Celebs, On Writing, Ramblings, Revelations, Soapbox Blues, The Writer's Life
Newer Post Older Post Home