Reunited And It Feels So Good... 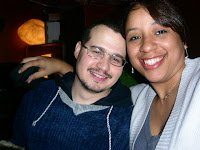 JACK WAS IN TOWN THIS PAST WEEKEND!!! It was totally splenderific to see him again, even if it was only for a few hours as he passed through NYC while doing the Holiday thing with his family. Aren't you just JEALOUS? Jack included ME in his family plans... yeah, you're jealous, I know... But seriously, I haven't laid eyes on my Sweetie McSweeterton since our drunken outing in '06 so I was super excited to see him.

He joined me on the LES during the NYC Blogging Ladies Holiday get together (to see awesome pics of that night, head on over to Eb's site) and awww I miss him already again!!!!

Funny side-bar: His mom thinks we're lovers, a story co-signed by his cousin who is a delightful little instigator and kept adding fuel to the gossip fire. HILARIOUS!! The best part is, his mom asks if I'm Puerto Rican, and when she's informed that no, I'm Dominican, Jack's mom replies, "Well, at least she's Latina." Thanks, mom!! HA... gotta love Latino moms, they are the best! 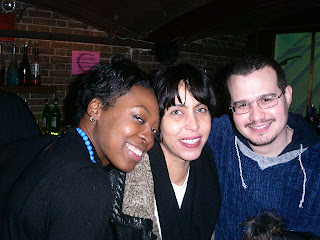 And now let me just say, AIN'T NO PARTY LIKE A NYC BLOGGING PAR-TAY! Even though I was in crazy pain all day Sunday, as in I was limping all over Pathmark at the Atlantic Center Mall, I had tons-o-fun hanging out with all of the lovely ladies of blogger.

We should totally make a calendar: The Lovely Ladies of Blogger!! DUDE, do you know how much loot we could rack in? Just ask Twanna over at Funky Brown Chick- she was just featured in a sex bloggers' calendar, although they were raising money for a charity. Still, I'm just sayin'... someone put that shit together ASAP... if need be, I know a pretty good photog *wink* Hey, Marcin; wassup, baby?! 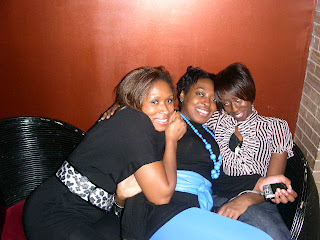 The plan was to meet for Happy Hour (which I missed; college basketball games had me by the throat, and I usually HATE college ball. However, when it's college ball on a 50" flat screen plasma and there's pizza involved, well, can you blame me?!) then dinner then dancing. Dinner was DEE-licious (Boca Chica on 1st & 1st- the nexus of the universe HA!) even though my chicharron de pollo was NOT what *I* know chicharron de pollo to be, I'll give them a pass because it was still tasty. 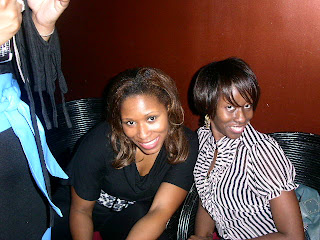 The dancing part was, oh, how do I even describe how good it felt to go dancing again after such a long hiatus? My shoes were killing me but I danced through the pain out of sheer determination to enjoy every minute of this rare night out!

Funny story- the bartender at the club was a total stank-ass BI-OTCH who was ruder than rude and kept ignoring us... so while I was complaining about it, some random dude comes up to me and Jack and tells Jack if he were to whip out his penis and I were to just unleash the twins, we might get better service. I'm still not sure who he was hitting on... why is it everytime I'm out with Jack the bi-sexuals come out the woodwork to hit on us BOTH at the same time?

But I unfortunately have something yucky to report- JACK wasn't the only Jack I reunited with that night. Yes, my dry spell was interrupted by the 4 shots of Jack Daniels I drank that night. And it wasn't just whiskey... I drank some other shit, too... I know, I know; I said I was through with alcohol, but clearly it wasn't through with me!

Scary part was, I was totally fine until ShellyShell and I went to visit Lani... and she gave us shots of JAGER. My first and last shot EVER of that nastiness. It tasted like licorice dipped in funky ass juice and NEVER AGAIN will I subject myself to that mess. BLECH!

Here's Ms. Lani with the bar manager, a very cool Anglo by the name of Dennis: 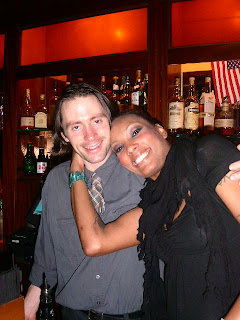 ShellyShell was in rare form that night... she was spewing such craziness at the bar that poor Lani just gave up her battle with Gravity. FUNNY SHIT- y'all missed out! 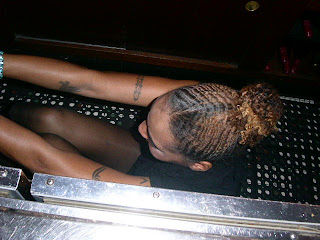 Oh, and Dennis played this song for us:

Even though it is very clear that both me and Lani are NOT the ones Mos Def is talking about in this song! Booty? What's that? I know not this "booty" that you speak of... Shelly, honey, this was alllllll you!

Then he played this:

Other things of note: I am not a kid anymore. Someone please remind me of this next time I go out. The next morning my whole body ached. Seriously from head to toe- PAIN! What made me think I can stay out until 6AM dancing and drinking n shit? What the hell???

Also, Jack thought he was being REAL FUNNY asking me my shirt size, suggesting maybe I'm an XL instead of a large because of the Twins. DANG- they are NOT that big!! As proof, here I am wearing said TShirt (thanks, boo!! You know I love me some Mets!): 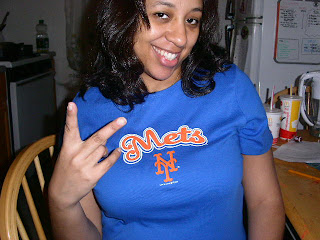 (peep the tired eyes in the shot... HOT. MESS. But my hair was still cute so it doesn't matter- did you notice? I got a haircut, y'all!)

And now, I cannot wait until next weekend... that's right- another girls' night out. It's the holidays... what? Don't judge me, monkey...