Dang, Omi, why you do me like that, son!

I got tagged, y'all, and since I'm home and it's raining and I canceled my faux-date, I'll participate.

But you know I ain't tagging nadie, so relax.

Six things you might not (ever want to) know about me:

1- I talk to myself in the shower. I play out scenarios and practice what I'd say and/or do in those scenarios, that way if it ever happened I'd be prepared. Lately, because I've been watching Law & Order SVU like it's my job, I've been practicing kicking an attacker's ass... and almost busted mine in the process. Here's a tip: do not try any ninja moves in the shower AFTER you've soaped up.

2- I've never been in a physical altercation ever. I mean, I think Minnie and I had it out once or twice (you would, too, if you were locked in a 3BR railroad apartment all the live-long day) but I've never had some chick step to me and try to fight me. And that's saying a lot seeing as I grew up in Bed-Stuy. But then again- who was gonna fight me? I was locked in the GD house all day!

3- My "fight or flight" mechanism is always stuck on flight. When I see, hear or just anticipate any kind of danger, I'm out and pretty much don't care who gets left in my dust. Once, on a flight to or from Buffalo, they switched my seat with a minor who was in the emergency exit. "Are you okay with the responsibility, ma'am?" In my head I was like, "Y'alls dumb asses better keep the fuck up, 'cause if this shit goes down I'm. OUT.

4- I used to be seriously into witchcraft and santeria. Just convinced myself I was a witch with dormant powers because everything I wanted would be mine somehow and I couldn't explain it. Til this day I watch Charmed n Sabrina n Buffy with envy in my heart.

5- When I can't find my Blistex, I use Vick's Vapor Rub as a lip balm. And even though the container says "for external use only" I STAY putting Vick's IN my nostrils. What? You know a better way to clear your nasal passage during cold n flu season?

6- I used to have a puppy named Rocky, back before I became allergic to pet dander, and he was my baby. One day Papi took him out without a leash and he was gone for good. After that, I grew to hate dogs, except Celia's dog Bear because he looks like a smaller, brown-haired version of Rocky. I still miss his dumb ass...

So the other part of the tag was to go into your 6th photo album and post the 6th photo. And here it is: 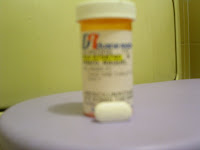 The world's largest antibiotic from when I was on my deathbed in February. I really can't say WHY I took a picture of it, but I'd like to point out that this fucking pill was a BITCH to swallow, because my throat is retarded like that...

*smooches...begging and pleading- Please Don't Tag Me No Mo*
----------
I'm telling the next tagger, know this right now- I'm not participating. See this foot? *shows you foot* I'm puttin' it down.