Funny, The Memories A Photo Can Trigger

Since C and I are now buddies on Facebook, I keep seeing these photos he's been posting to his page, including some that feature yours truly.

It's kinda weird to see that; I mean, I know it is only because the babies are in the photos and he likes to show them off like any other proud papa, but eww... I'm in them.

It's a little weird, don't you think?

Well, for me it is... especially when I remember the day each photo was taken- 95% of them were when we were still together, faking the funk for all it was worth. And the new ones make me a bit sad because those are memories my babies are creating, experiencing, etc, without me.

One particular photo, though, really stuck out from the rest, and the memory it solicited was definitely weird for me: 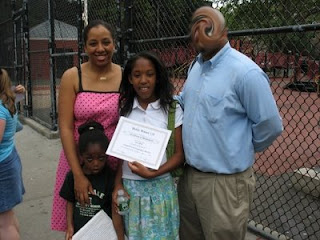 We were separated but not yet legally divorced. There was this slight tension between us because we had "slipped up" the previous November and I'd also gotten the vibe from him that he wanted to keep "slipping up" but I could be getting the sequence of events wrong. That whole summer was a blur.

But the day this picture was taken, K graduated from the 5th grade. C and I were still new at the "splitting up the summer" thing, but knew that he was definitely taking both K&N for the first part of the vacation, so shortly after this photo was taken the babies left for at least three weeks.

And what makes this day stand out is that I remember the fumes from C's Jeep hadn't even dissipated fully when D (the other half of THE BREAK UP HEARD AROUND THE WORLD) showed up at my place. We were in full monogamy mode by this point and I was kid-free, off from work for the rest of the day and eager to do all kinds of dirty things with him.

Our whole relationship was pretty much us finding new ways to violate my mattress. I mean, we went out and talked and stuff, but mostly we made the walls blush.

It was crazy hot on that particular day, and I don't like air conditioning so my place was hotter than hell. In fact, The Devil stopped by but was like, "DAAAAAAYUMMM it's hot in here!!" and stormed out in a huff.

I agreed to buy a window fan and D came with me to get it. Then we stopped by Carvel for a Sundae, drove back to my apartment, put the fan in the window in my bedroom and proceeded to, you know, do it.

Afterwards we ate the shit out of that sundae and took many cold showers, I think (did I mention it was HOT?!?!).

While my babies got their first taste of "splitting their time between mom and dad" before they were able to wrap their heads around the fact that the family they knew was officially over, I was fornicating my non-ass off.

I'm not even sure how to react to that memory. It just crept in there against my wishes and made itself at home. Put its nasty feet up on my couch and snatched the remote. Just pure rudeness.

And now I kind of wish I hadn't seen that photo, especially not on Cs FB page.

*smooches...thinking, I have a million stories like this, but you'll have to wait for the book*
----------
SIKE! I ain't writing no damn book on my boudoir habits, get real!! But there may be a few chapters here and there in my memoirs. I think. lol

meanwhile I still have that window fan, and sometimes on really hot nights, when the girls are with C, I remember why I bought it...
More genius from The Jaded NYer
Email ThisBlogThis!Share to TwitterShare to FacebookShare to Pinterest
Labels: Babies, Lady Estrogen, Memories, NASTY, Revelations, Romance? What's Romance?, The Ex Files, VIP Hell Pass
Newer Post Older Post Home