Reading Is Fundamental... And Other Musings

Tidbits and such. From my mind to yours.

It's A Beautiful Day In The...
Gayborhood... yes GAYBORHOOD. That the fabulously awesome word brought to my attention last night on Monday Musings, as my lovely co-host, Ms. Bangs and a Bun herself, described her old neighborhood in Toronto.

Seriously I almost pee'd my pants. Especially because it reminded me of this scene from episode 4 of this season of 30 Rock, where Jenna & Tracy are scrambling to find actors to ruin an audition for an additional cast member, and they come across a bunch of gay men in line outside of a taping of "The Actor's Studio" with Hugh Jackman, and they yell out to the gays, "We need some funny gay men; if you're funny and gay come with us!" and then this gay guy speaks up and says, "I'm not gay... I'm BI-LARIUUUUUUUUSSSSSS!"


This Shit. Tears. Down Cheek. Sadness.
Such a WRONG video to watch during PMS Week...


Corinne Bailey Rae "I'd Do It All Again"


We Should Start A Rap Duo Or Something
Now mind you, my rhyming skills are um, yeah, no and I can't carry a tune, and I don't know if Eb can work a mic past the karaoke bar, but DAMN if the CD cover wouldn't be hot as shit! 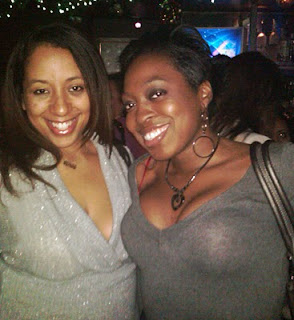 Listen- if some of the wack artists that are out now can do it, I don't see why we can't. STOP HATIN!!

Reading Is Fundamental
I don't know about all of you, but I really enjoy the book talks we have on Monday Musings. Not only does it feed my nerd girl hunger but it also spreads the word that literature is important in our lives.

But I'd hate for y'all to think I'm some high-brow literary snob (even though I am) so for the next Jaded Literary Moment on January 18th, I'd like to recommend you all read and oldie but goodie: Pet Sematary by Stephen King. This is the very book I was reading on my trip to visit what would soon be my alma mater (Alfred University), even though all that "nature" scared the bejezuz out of me!

King has always been my favorite genre author, ever since I was a young'un! I'd borrow all his books from the BK Public Library on DeKalb Avenue and read them until I was spooked shitless. AWESOME reads, I tell ya. And this one is no different!

"...There's Got To Be Something Else, Something More..."
I've had a pretty rough year and it's about to all come to a head real fast and real hard. I'm on "borrowed time" so to speak, because I've let a few things go unhandled (yes, I just made up that word. DEAL!) for far too long.

See, avoidance is my specialty, but you can only ignore something for so long until BOOM! POW! KABOOM!! Die-hard reality in your face.

I try not to let it break me, though. And at times like this, I have to bring out the big guns, like so:

I hope it helps any one of you who may be a lil down during the holidays like I am.

*smooches...hoping for the courage to face this life already*
----------
I guess if it's banging down my door I have no choice but to face it, right?
More genius from The Jaded NYer
Email ThisBlogThis!Share to TwitterShare to FacebookShare to Pinterest
Labels: A Life in Progress, A Life in Shambles, Bitchy Karma, Literature, Memories, Mis Amigos, The Writer's Life, Vocabulary
Newer Post Older Post Home