She Taught Me How To *Side Eye* 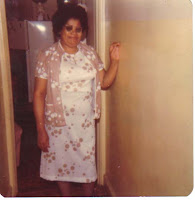 Doña Fella they called her. Not with sarcasm but with oodles of respect. She commanded it from everyone, and they gave it without complain because, quite frankly, she was the shit and everyone knew it.

No one will ever replace her... often imitated, never duplicated...

I don't know when she came here to the states. Maybe in the late 50s, early 60s. Don't know if Trujillo was dead or alive yet. But she came here, like so many others, for a better life.

I'm told she took in kids and laundry to help Papi make ends meet; she pulled her weight and still made a home for him.

When we came along, she took us in, too. Did our laundry, fed us, combed our hair, taught us proper hygiene, nursed us back to health, whooped us with her chancleta (although not very often) and spent half her life in that kitchen. On her feet all day. Sick or not. Sweating like a slave. She came here for a better life.

We watched novelas (or rather, they watched us) together, and she made comments like "Voy a tener que comprar una vaca" everytime I would serve myself tall glasses of milk that I'd gulp down like water. In the market she hunted down deals like a pro, bending canned goods on purpose so that she wouldn't have to pay full price for them.

She would take a few of pieces of thick steak from the butcher and slice and pound them within an inch of their lives to make it stretch for all the mouths she had to feed. Papi, Minnie, Titi Gloris, Me, Mari, mami. Sometimes she still took in kids and they had to eat, too. Sometimes other relatives stopped by and they had to eat too. So she sliced and pounded that steak until two pieces turned into 10. She came here for a better life.

Once, I fell victim to a killer stomach virus. I was throwing up everything I'd ever eaten in my life and some stuff I'd yet to eat. I was at my house for once, in my own bed, tossing and turning, wondering what I had done to deserve this. I was used to eating my weight in food and now I couldn't keep anything down. I was sweating. Feverish.

I had this dream... oh, it was so beautiful... I had the biggest cheeseburger known to man and the thickest, sweetest strawberry milkshake to wash it down. It was a cool day out and I ate it all. My forehead wasn't hot anymore and I was so happy and satisfied. "See you next Friday," I told the shopkeep in my dream, and then I heard Grandma say "Que?"

I opened my eyes and SHE was at MY house for once. Sitting by my bed. Sitting vigil. Placing cold compresses on my forehead that smelled like agua florida and were ice cold. The sun was coming through my window, ready to set itself, and there she sat, smiling at me and feeling my forehead. She offered me a hot cup of ginger tea. "Tomate esto." My fever broke that day.

When she brushed my hair, it was like a lullaby for my scalp. I would rest my head on her lap and she'd work her magic, sing me songs in Spanish, tell me stories. When she bathed Baby Mari, she would sing her similar songs and I'd sit and listen... "Habia una vez/un balquito chiquitito..." Mami would sing the same ones.

She gave me a stern talking to when mami and I became sworn enemies shortly after my 18th birthday:

I often wonder if mami got the same talk. If she did it didn't work; I was still "disowned" all summer and into the winter of 1993.

From her I learned how to cook. Change a diaper. Rear a child. Wash a dish. Run a household. Care for a man. Even when she said to Papi, "Mira, Miguel, yo te tengo ese odio" I knew she didn't mean it. Because it always ended in a smile, or a laugh. A side eye for sure, but with a smile or a laugh.

My stubborn American ways fought and fought her traditional Dominican ways; she spoke to me in Spanish and I answered her in English. We understood each other but refused to conform to the other. But you can't fight what is deeply embedded in your subconscious; what you grew up learning, knowing , wanting, loving.

Other grownups could always see the difference in the kids raised in her house. "Esa se crio con Doña Fella. Tiene buena cuchara." We were well behaved and knew our place. She did that. 85% of all our achievements were because of her.

I pushed myself to finish High School long after I'd lost interest because of her. I pushed myself to finish my BA in honor of her memory. And now, I am finally one week away from a finished thesis because her picture on my bulletin board above my computer watches me sloth away like someone who doesn't know better and is not pleased. Not with the unfinished thesis, or the messy kitchen, or the piles of laundry, or that babies who speak no spanish or the unmade bed. And especially not with the divorce.

Because she came here- leaving behind her young daughters and her sisters and her mother and her whole entire life- for a better life. For us.

I owe her the best me I can possibly become.

*smooches...finally finding the courage to write this tribute*
-----------
this was the post I really wanted to post this morning but was too chicken to do it... but then I spoke with Minnie about it and felt better about releasing it to the world.
More genius from The Jaded NYer
Email ThisBlogThis!Share to TwitterShare to FacebookShare to Pinterest
Labels: A Life in Progress, Beautiful Things, Memories, Mi Familia, Revelations
Newer Post Older Post Home