Allergies Are Trying To Kill Me...And Other Musings

Ya Girl Still Got It
I hit up some lounge on the LES w/Mari this weekend, just to chill and whatevers, only to have one of her little friends make a pass at moi.

Luckily Mari was there with the interception/block, because she knows I'm too through changing diapers! The last thing I need is some handsome, chocolaty, 24 year old Cornell graduate in his physical and sexual prime with no real respon.... hmmm... maybe I need to rethink my position on younger men...

But a quick observation from the evening? Some really, really pretty girls are dating some really, really average-to-ugly-looking dudes. What's up with that? Are cute men not nice or something? It's such a strange phenomena.

Allergies Are Trying To Kill Me...
...but I will not be defeated!

True my face and eyes are itchy as hell and my nose is completely useless at this point, but I will not be defeated.

And never mind that I'm sooooooooo groggy that I can barely walk... I don't care.

I will not stay in bed. I will not let the allergies win. When I get home I will make dinner, I will wash Ns hair and I will shred some more of the 300lbs of junk mail sitting on my table.

NEVER GIVE UP. NEVER SURRENDER!!!

The Show Must Go On
With that said, Monday Musings will go on as planned. 11PM. If you can, give us a listen... this week we're talking Hip Hop and its origins with J from The Liberators of Hip Hop. 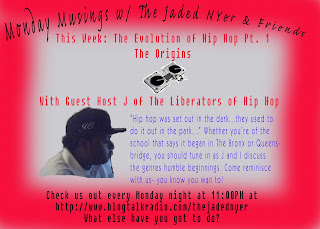 I'd love for listeners to call in tonight and tell us their earliest memories of Hip Hop music, you know, back when it was good... oops! Did that sound biased?? Pshhhh, like I care... "Back in MY day..."

Me And Google Are About To Have Problems
Can my ex's PUH-LEESE stop googling me??? I had yet ANOTHER blast from the past come out of the woodwork and hit me up on MySpace. So far it's nothing; let's hope it stays that way.

And it's not just any ex. It's THE ex. The one that shattered my confidence for all eternity by breaking up with me. ME! Yes, hard as it may be to believe, HE dumped ME, and now he's all like:

"guess who stopped by to say hello. I used to be ur bellisimo. lol"

My bellisimo? Really? That's what you came with? Whatever, negro... and just because you still look good don't mean shit. I mean, I was courteous in my response because my mami raised me right, and because I'm not gonna assume his intentions are anything more than just saying "hi" but I'm annoyed. Mostly because I'm not feeling well, but still annoyed.

It's shit like this that sometimes makes me think I might have to leave Brooklyn for a little bit... too many people I know be out here, finding me and shit...damn computers!

*smooches...wishing that I wasn't so G.D. unforgettable*
----------
in other news, I've started watching Season 4 of The Office and all I have to say is NO Dwight DIDN'T!!! Poor Sprinkles...
More genius from The Jaded NYer
Email ThisBlogThis!Share to TwitterShare to FacebookShare to Pinterest
Labels: A Life in Progress, Baby I'm a Star, Body Wars, Mi Familia, OW My Liver, Romance? What's Romance?, The Ex Files
Newer Post Older Post Home