Despite the debilitating cramps that threatened to end my life (as usual) I had an amazing weekend!

On Friday I took the babies for our annual splurge: dinner at The Four Seasons. It's part of what I like to call Preparing The Babies For The Good Life. I don't want them to ever act like country bumpkins if ever faced with fancy-schmancy dinners somewhere, so I save up all year for this one event, just so they know how to order, eat and act at "upper crust" restaurants. They had a blast: 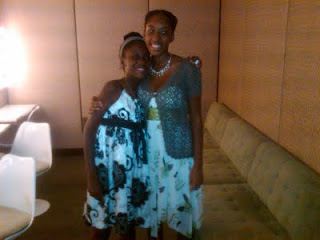 Saturday the babies and I got up pretty early, donned our workout gear and headed across the Brooklyn Bridge to participate in Summer Streets. First of all, walking the bridge is not fun anymore. The walkway is too narrow for all the tourists, runners, walkers and cyclists. However, you cannot beat the views and photo ops: 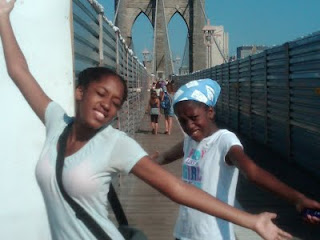 At Summer Streets N shot some hoops, grabbed a bunch of free sample goodies, fell in love with the Vibram Five Fingers shoes (BLECH) and joined me on a hike AND up the rock wall. K was a little mopey because we weren't able to rent bikes (they put a 1-hr limit on the rentals. BOOOOO!) but was a trooper and enjoyed some free samples PLUS the shopping we did at a vintage shop on 1st ave up the street from her fave eatery: Atomic Wings. 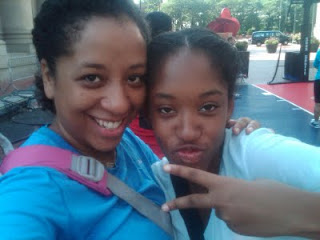 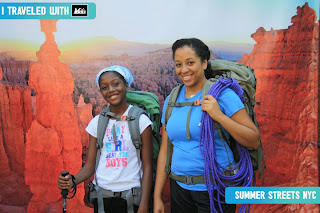 AAANNNNNDDDD we met Brother Omi's oldest son and Omi's sister & I plotted on how we can become in-laws in about six or seven years. At the very least, the kids got along so we planted the seeds LOL!

Then came Sunday. Oh glorious, glorious, friend-filled, fun-filled Sunday. I joined the homie Tiffany for brunch (wherein she almost fought some old biddies for eyeballing her the wrong way) and we were finally able to catch up. It had been WAY too long since we'd hung out and we toasted to being able to meet up more often. After we parted ways I met up with Eb in Harlem because she FINALLY FINALLY FINALLY agreed to introduce me to R&B singer Joe. I mean for nearly three years I've been in her ear tryna get to that man and she was being stingy! But Sunday was THE day and I was ready- 'fro extra big, breasts on display...just full on groupie mentality. 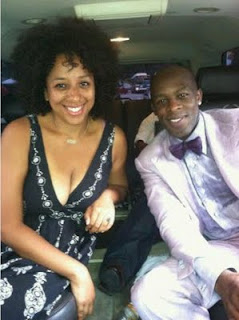 Joe and I shared a moment, y'all. I planted the seeds. He went home thinking about me; made a mental note to hit up Eb next time he's free to ask about me. I know it. No one can resist the 'fro/tits combo. No one. Even the gays fall victim to it and unleash the "GIRL you are wearing that dress!"

We topped off the evening with a quick bite at Moca (Hi, Malik!) and then went to the Mixtape Comedy Show for Anthony Anderson's birthday. Had there been an after party I don't know if I'd still be standing right now. But there wasn't so I was able to go home and SLEEP (perchance to dream...about my hug & kiss with Joe... oh, you thought I wasn't gonna go in for a kiss? Sheeeiiiittttt...).

So despite the crazy man on the train who was mad at his mom for waking him up late for work, and the shopkeeper who asked me out while I bought some sanitary napkins, it was, indeed, the FUNNEST. WEEKEND. EVER.