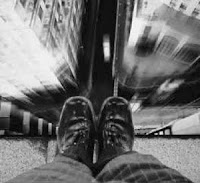 If you search back a few years, you'll find a post or two of me at my lowest low, when I really felt I had nothing to live for, when I actually surveyed the contents of my apartment for the best way to end my life.

I can say that casually now because it was an isolated incident and well, frankly, I'm too afraid of death to invite it over. No thank you, sir. Keep it moving. Come back in about 75 years.

Now, I'm not going to put on airs and act like the fact that NO ONE knew what I was up to on that day makes me better than others who announce their suicide attempts, because in the end, had I gone through with it, I'd have given you all permission to call me a selfish bitch.

Suicides leave behind people who wonder, "What could I have done to help?" and "Why didn't I see the signs?" Family and friends blame themselves and each other for the loss and it's a pain that can probably never fully heal because those left behind never get answers. AND they have to deal with the mess-- physical and emotional mess-- left behind. It's a selfish act because the person committing it thinks their problems are so monumental and beyond anyone's comprehension, and the only way to solve everything is to die. I know because I was there once upon a time.

And it's an affront to people all over fighting for one more day on this earth. It's a slap in the face to the Universe that nurtures us and I'm glad I came to my senses.

So why this rant? Years after the fact?

I was recently privy to some tweets from someone who was posting updates about wanting to die, missing her deceased grandmother and cutting herself (and posting the pictures to prove it). I was 100% disgusted with this display. I wanted to empathize with her because hey- I miss my grandmother like you wouldn't believe, but many of her tweets were about blaming others for how she was feeling. "I blame you," read one tweet. Just like that.

Who was the "you" to whom she was referring? Not me, that's who. And not anyone else for that matter. If she feel bad, that's on her. HOW DARE SHE put the burden of her self-inflicted wounds on someone else? And then after she had her twitter followers all a-flutter trying to help her, she responds with, "I'll be fine. I'm fine." BITCH, WHAT? No. You're not fine. You just tweeted a picture of your sliced up flesh. You need help. From a professional. What you DON'T need is to be all up on Twitter blaming strangers for your depression, then dismissing their attempts to lend a hand.

I'm not trying to poo-poo her feelings or her depression. I know firsthand how crippling it can be, but her behavior on this particular day, with all this blame-game nonsense? NO MA'AM. I hope she gets help and starts to feel better about her life, but in the meantime...selfish shit like that gets NO LOVE from The Jaded Empire.