On Sunday, despite the incessant rain and my lateness, we had a great birthday party for N's 10th. Food was great (thanks, Derci!), friends and family were awesome and most importantly my baby girl had the best time.

Right now I just want to give a shout out to Mami for being the hostess with the mostest, K for being a great helper and big sister, KarrieB for trekkin out to Jersey with me, Cathi for driving all the way down from Western Massachusetts in that nasty weather to be there, her beau Mike for manning the grill and N's friends from camp for braving the rain and being adorable. It was awesome.

Initially I was worried about the party, about how I'd react and behave once I had to encounter my ex-husband and his new wife in light of all their less-than-stellar behavior lately. But once faced with them I knew Mami would not tolerate any poor behavior on my part, and you best believe that my fear of Mami's reprimand trumps any disgust I'm feeling for this man and his old lady.

I still let it be known that I'm stank with what they've been doing (behind Mami's back of course!), gave THAT heffa a sideways hello and kept it moving, still courteous but not going out of my way to do shit for them. KB said she could sense their awkwardness and a part of me was glad- the only reason they feel awkward is because they KNOW they're wrong and are trying not to stir the hive. So in my mind I was all "To hell with them and their awkward feelings!" It was N's day, though, so I just concentrated on her and her friends and making sure she had a smile on her face all day.

Besides, I'm kind of over them, you know? I can't spend another minute fussing about whatever pussy-hypnotization she's put over C to make him disregard his daughters. That is an issue between K and her dad at this point (thanks to everyone for your advice on that) and I let her confront her dad and THAT heffa and just let it go.

Plus K let me in on a little bit of information: she approached N about the whole wedding debacle, and N expressed her disinterest in her dad's decision to get married without inviting them. When K asked her why, she said because she didn't want to go anyway. When K again asked her why, N, bless her little heart, said, "Because I like my original Mommy." 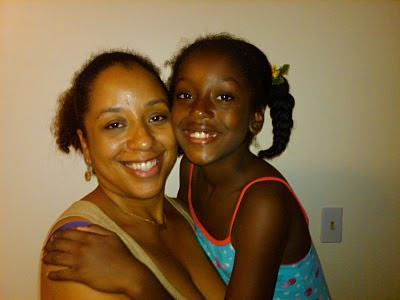 So there you have it: Raquel-1, THAT Heffa-0

Not that I'm keeping score...

*smooches...being petty online because I can't in real life*
-----------
I so hate having to be a grown up in real life. HATE IT.
More genius from The Jaded NYer
Email ThisBlogThis!Share to TwitterShare to FacebookShare to Pinterest
Labels: A Life in Progress, Babies, Bitchy Karma, Happy Happy Joy Joy, Mi Familia, Mis Amigos, Ramblings, Soapbox Blues, The Ex Files
Newer Post Older Post Home