On The Train For Reno...And Other Musings

Another Monday, another string of random postings. Ready? Let's GO!

Blogging Etiquette: This Ain't A Dating Site!
(You know the deal: Smarty P. Jones and The F$%k-It List and I have teamed up to help guide you through the finer points of interacting with others in the blogoshpere. So pay attention.) 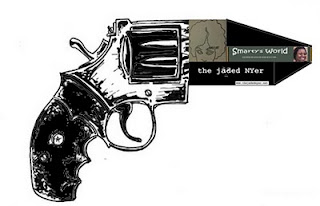 When I started blogging it was merely a new form of keeping a journal, one that my friends could openly peek through. But as more and more strangers began to find my page and I became an active participant in the blogging world, I began to notice that people were using their sites as a platform for attracting love affairs.

I'm not immune to this; I've had a couple of suitors pursue me via my blog, even entertained it for a minute and then I realized- I know who I am, but I don't know who they are. It's the internet; they place where The Crazies can pretend to be normal. SO I'm here to say to you, speaking from experience, if someone approaches you with romantic overtures because of something they read on your blog? That's a red flag. Run away. Run away fast.

The Unemployment Blues
So many of us are out of work these days it's a wonder the suicide rate isn't higher. The auto industry, the publishing industry, even retail markets- no where is safe from this "economic downturn" devouring us right now. So I've decided to take it to the airwaves. 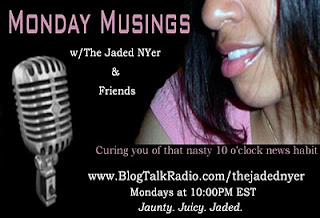 Join Irene and me tonight on Monday Musings as we discuss how best to deal with unemployment, from pulling yourself out from under to staying afloat until your next steady check comes around. So tune in, punkie... you know you want to!

On The Train For Reno
A few months ago I watched the 1939 version of the film "The Women" and besides falling in love with the acting and the writing, I also took away a bit of wisdom from it.

The story line follows a socialite who finds her husband is having an affair with a shop girl and has to face the humiliation of the entire society page knowing about her failed marriage. While in the process of trying to come away from it with some dignity, this soon-to-be divorcee travels to Reno where any and everyone can go to get a quickie divorce.

She meets up with others in Reno who are there for divorces as well, and they sit around reflecting on the mistakes they made to end up in this predicament. While one says she should've never married for love and another laments marrying money, one wise woman says, "No matter what you pick them for, where does it get you? On the train for Reno."

How true and depressing at the same time. So if it's all going to end anyway, let's just go out there and have a good time, okay? Okay!


Afro-Latinos Are The Prettiest Kind
Shout out to Eb the Celeb for a very fun evening at the Doghouse Saloon last Thursday. She was the guest bartender for Karaoke night and it was a much needed fun night out with the NYC Blogging Posse.

But I want to bring your attention to these attractive sons of bitches right here: 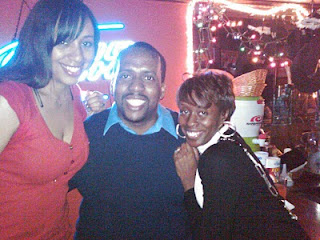 Did I ever tell you the one about the Dominican, the Haitian and the Panamanian...?

*smooches...a little too conceited about my new hair*
----------
except, I'm not giving enough neck in this photo; Tyra would be so disappointed in me...
More genius from The Jaded NYer
Email ThisBlogThis!Share to TwitterShare to FacebookShare to Pinterest
Labels: A Life in Progress, Baby I'm a Star, Blog Talk Radio, Jobs, Latinos Rule, Mis Amigos, Musings, Negritos, Photos, Romance? What's Romance?
Newer Post Older Post Home