"Don't Sweat The Technique"...And Other Musings

Tales from a NYC junkie...because I know you crave it so!

If You're Married And You Love It...
I have some good news and some bad news. The bad news is that I will not be able to Ustream my radio show tonight because my apartment has THE poorest lighting I've ever seen. The good news is that The F$%k-It List and Brother Omi are still going to co-host... IN PRIME TIME! 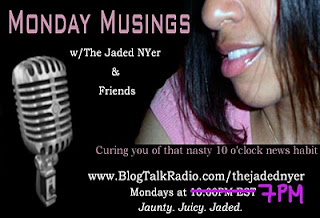 Tonight on Monday Musings we will be discussing The State of the American Marriage- everything that's good about it, where it can go wrong and most importantly how and should we try to salvage this "sacred" institution. Tune in, suckaz!

This Time I Had A Mic
Saturday's reading at Bluestockings went really well despite a lot of anxiety and fear and just plain ol' AAAACK feelings. In the end I was super pleased with everyone's performance, the location and the support and feedback from the audience. 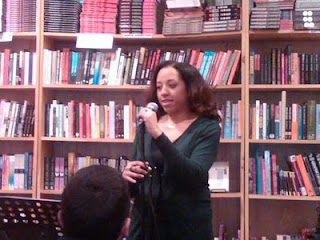 Can I just take a moment to thank Brother Omi, Juju, Gia Shakur & Ms. Eb the Celeb who got up on the mic and did her thang. SOBER! I'm so happy I was there to witness that moment. I knew she had it in her:) 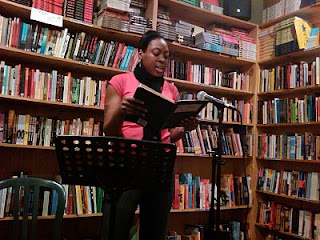 I'd also like to extend big, warm, Jaded hugs to everyone who came out to support, including fellow writer Fikriyyah George (@fgeorgewriter on Twitter) who was ready to pinch-hit/read when I thought one of my writers was a no-show, and Ms. Capitella, my third grade teacher from Our Lady of Bedford Stuyvesant (that was the bootleg name of the school before it became St. John the Baptist School). YES. Third grade teacher! She found me on Facebook and came to the reading and, well, it was just a great feeling to hear her say she was proud of who I became. Even a Jaded NYer likes to hear that from time to time.

Don't Sweat The Technique
This should actually be titled, "Reason #1 Why You Need To Move To NYC" because mannnnnnn, shit like this only happens here.

So check it- Eb puts me on the list at SOBs to see Vaughn Anthony perform which is cool because y'all know how much I LIVE for live music. I'd never heard of this cat but was like, umm, free concert? R&B? I'm there. Turn out dude is John Legend's little brother. And John Legend was there. SITTING. RIGHT. NEXT. TO. ME. He even got on stage to perform. The night could've ended right there and been great but *record scratch* it got better. 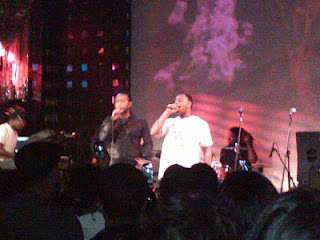 The next act? Rakim. RAKIM!!! It was Lord Finesse's birthday and RAKIM was performing. RAKIM. Technically if you were there for the first show you're not really supposed to stay for the second show. Well, I was in the cut so no one bothered to escort me out. And I got to see RAKIM on stage. 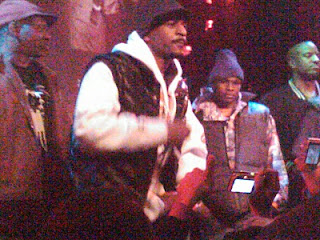 Sooooo, is anyone going to explain to me why he still looks so damn good? Like, why aren't these old hip hop dudes aging? What the fuck? 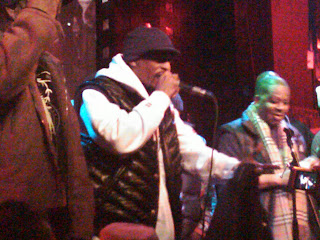 Speaking Of Only In New York City...
On my way home Saturday night, dealing with the FUCKERY that was the MTA and its bullshit shuttle buses and switch problems at York Street, I got hit on by a young lad at Canal Street. I was just minding my own business, grooving to some Marsha Ambrosius one minute, and the next thing I know dude is serenading me. On the subway platform. In front of everybody.

Poor guy. He wasn't terrible, but he didn't blow me away. And no, his "game" didn't impress me, either because A)he was 26 B)he was 5'4" if he was an inch and C) he was busy impersonating LL Cool J with the lip-licking thing. Ummm, how 'bout no? I'm too old for this shit...

You Didn't Call Me.
I wrote you an entire blog post practically DARING you to ask me out and you didn't call me. You also didn't go to my reading. That one hurt more than not getting asked out. I'm starting to think that you don't have ESP and are not picking up on my ultra-covert and subtle hints on how swoon-worthy I think you are. I had a great time cutting up with Eb after my reading, but on my way home I kept thinking, "If he'd shown up there's nothing I wouldn't do to make it work."

*smooches...putting my shields back up*
----------
I can't spend ALL my days waiting for him to get a clue. Who's next?
More genius from The Jaded NYer
Email ThisBlogThis!Share to TwitterShare to FacebookShare to Pinterest
Labels: A Life in Progress, Baby I'm a Star, Big City Livin', Good Shyt, Happy Happy Joy Joy, I'm Not Bitter, Latinos Rule, Literature, Musings, Photos, Romance? What's Romance?, The Writer's Life
Newer Post Older Post Home