Growing up like I did in my ivory tower, books became one of my only escapes. I read some of your typical kid stuff (Judy Blume and the like) and lots of horror and gore that someone under the age of 13 should ever read (Clive Barker and his kind). In all that time the stories were always about people that didn't resemble me and my family and friends at all, and I was OK with that as a child. Books were fantasy, a place to go when things at home are annoying. The last thing I wanted to read about my mom or cousin in a storybook!

But as I got older and all these books by African American authors became known to me, I got a little defensive and asked "Where are the Latino authors?" And I didn't mean Marquez or all those other European-ish people of Spanish descent. I wanted to read books by brown people who lived a bilingual life like I did.

At that point I was directed towards some really nice Mexican American/Chicano writers and that was cool and all, but I wanted my professors to understand that YES, Mexicans and Dominicans both speak Spanish and we have that in common, but our stories are different. Hell, even our Spanish is different! I had to specify that the brown people I was looking for were Caribbean, not Mayan or Andean or Incan.

I read "How the Garcia Girls Lost Their Accent" and immediately I fell in love. she was Dominican, LIKE ME, and she made a life for herself writing stories, LIKE I WANTED TO DO! It was the role model I had been looking for all my life (which, by the way, I never found in the sciences, either. Where are my Dominican scientists? I really needed y'all in college but I couldn't find you!). Afterward I read "In the Time of the Butterflies" and the sequel to Garcia Girls, "Yo!" and again- love, love, love!

So imagine how ecstatic I was to meet Ms. Alvarez at a reading last week in Washington Heights! She spoke to us about her amazing journey as a writer and the other endeavors she's undertaken as a result of her writing projects, and then read from her book about the heroic Mirabal sisters a.k.a. Las Mariposas (If you don't know who they are it's OK. I didn't either until I read her book. Google them now!).

The entire experience was so informative and enlightening and inspiring, and I especially loved sharing it with K (who is totally in love with the Mirabal Sisters' book), who was shaking- a ball full of nerves- as she spoke with and got her book signed by Ms. Alvarez. (N was there, too, but could give nan one fuck. Too bad, too, because I was going to name her Julia before everyone vetoed my choice.)

When it was my turn, I told Ms. Alvarez how much I admired her work and looked up to her and hoped my own writing would one day be as revered. She wished me luck in my craft and told me I was beautiful, and that my daughters were beautiful, and what a great, creative bunch we were. To say I almost died would not give the moment its props. 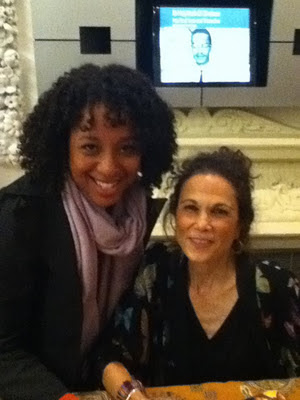 This memory will live on with me forever and ever. Guaranteed!