You can read about Friday and Saturday by clicking here.

By now many of you probably read all the news reports about the crazy amount of gun violence that plagued NYC over the long weekend, so I won't recount it or link to it here. Just know some people were shot over (what else?) some stupid shit and ruined what was an otherwise super-fun time.

Let's not focus on the fact that I had my baby with me out on the Parkway and that we were almost shot/trampled to death. Never mind that all my fears of crowds and parades starting becoming a reality some time after 2:30PM on Monday afternoon. I'd rather not speak about I've never been SO HAPPY to see Park Slopians in my life after narrowly escaping god-knows-what. Let me instead tell you how much fun we had (before bullets began whizzing by my face. Allegedly.)

On Sunday I decided to skip yoga and sleep in because, if you recall, I got home rather late (or early, depending on what you consider 4:30AM to be), and trekked up to Harlem in the late afternoon for an End-of-Summer house party at Eb's. Oh and she made my FAVORITE: fried chicken. All my thoughts of eating healthy and sparingly went right out the window as I promptly heaped some beans and mac 'n cheese on my plate. Fuck yo Primal lifestyle, there was FRIED CHICKEN in my midst!

We ate, chatted, made fun of people (at one point in the evening there was a strange influx of really unfortunate-looking dudes. Wearing rolled-up cut-off jeans & skippys. Is that a thing? Are guys- STRAIGHT guys- really loving this style?) and danced to the only three soca songs Eb would allow to be played.

Afterward I chilled with The F$%k-it List at Penn Station until her Suburban Express train arrived and then went home to my babies who had FINALLY come home after being away for two weeks. I was supposed to take a super-disco-nap in order to participate in J'Ouvert but, ummm, my body reconnected with the sofa and it was a wrap.

Instead of beating myself up over it, I just woke the babies up and urged them to get ready for fun on the Parkway, but only N was willing to go. So we got dressed, ate something, bought some flags and scouted a sweet spot near Utica Avenue with enough space for when The F$%k-it List and Tiffany joined me.

The parade itself was so beautiful and fun. All of my favorite BIG TUNES were playing from the trucks and the costumes...mannnnn I was in heaven! Some highlights include Tiffany's boyfriend in the Fauxberry pajama pants: 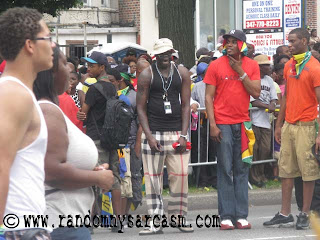 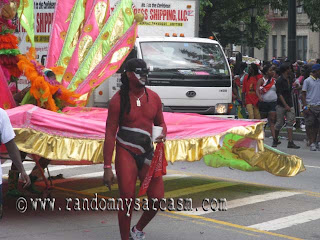 This Tonton Macoute devil thing that scared the babies (and ME!): 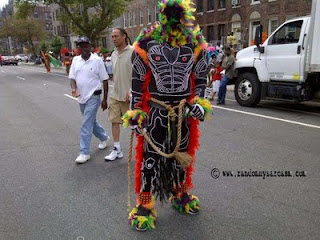 Me coming out as an Honorary Trini: 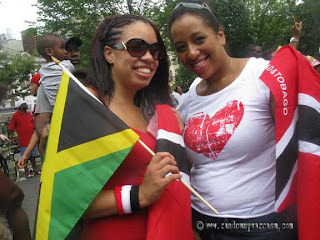 And these most delicious men (and women) just standing around looking...well, delicious: 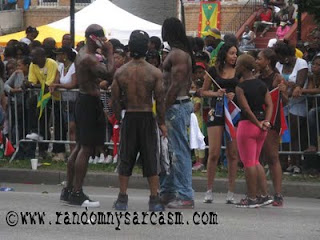 We feasted on fried fish, jerk chicken, nutcrackers (LAWD!) and took in all the beauty of our Caribbean people:

AND THEN THEY STARTED SHOOTING. So we left.

Until my life was in danger, everything was cool. And I'd still consider joining a mas band next year. Why not? As we've done in the years following the September 11 attacks on the WTC, we can't let a few idiots kill our joy. This is a staple of Brooklyn's culture. I might just be back.

Shout out to these heffas: 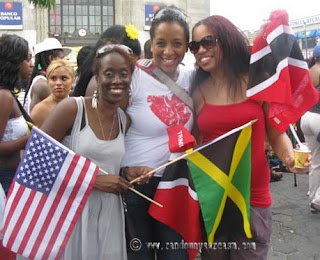 They saved my life. Allegedly.