Excerpt From "On A Blue Day" 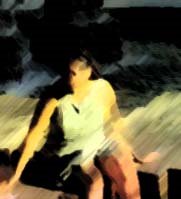 She couldn’t remember if the red ones were the uppers or the downers. Only that she wanted one.

Today coffee was not enough.

Today she needed something other-worldly and fast acting to help her forget what she had to do and where she had to go.

Her black Nicole Miller hung on the back of her bedroom door. Fresh from the dry cleaners. The plastic bag thrown casually on the floor.

Maybe the blue ones were the uppers?

In the carved mahogany mirror, her reflection was someone unknown to her.

Oh my God! Is my hair red? Since when?

A stray strand of red curl twirled in the path of the fan on the vanity where she sat. An antique vanity she had flown in from a shop on Melrose Avenue during her last visit to LA. Lifestyle perks of a young, rich widow.

Red--the red ones for sure.

The curl continued its dance across her right (left?) brow. It seemed to plié at her reflection. Its leaps and turns graceful. New York City Ballet graceful. Better even.

The curl held her attention until the door opened and her dress floated out of sight.

The curl took a bow and froze in place. It became angry at the interruption.

“I said don’t bother ME!” How easily the fan crashed into several plastic chunks, leaving dust on her dress. Maybe now she wouldn’t have to wear it. Instead maybe they’d let her hide out in her room all afternoon. Just her and her pills and her dancing red curl. She’d already been to one funeral that year. Two was just unfair.

But when had she dyed her hair red?

And what day was today, anyway? Tuesday? Her reflection offered no explanations. Why didn’t anybody wake me up? Tell me what was going on?

She swallowed three of them, dry.

On A Blue Day by Raquel I. Penzo is licensed under a Creative Commons Attribution-Noncommercial-No Derivative Works 3.0 United States License.