It is with the heaviest of heaviest hearts that I stand before you today to bid my beloved Roscoe adieu. This hurts more than Phillip's passing because Roscoe has been with me for so long, taking pictures of unfortunate New Yorkers and texting all manner of improprieties to friends and lovers. 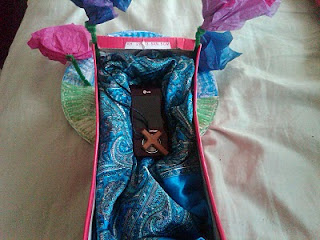 I remember when Roscoe first came into my life. I felt so complete, so...happy. He was everything I was looking for in a phone and more. He was cute, efficient, sleek and well, he became part of the family from day one.

Monday Musings was broadcast through Roscoe, always, even after Phillip came on the scene. I would plug in the headset and set him down and just not have a care in the world. You cannot dispute the awesomeness that was Roscoe during my radio show.

But I could tell in this last year that he was knocking on phone heaven's door. I tried to deny it and told myself, "He can make it to another season of Monday Musings. He can. He has to!" It pains me to know how wrong I was.

It hurts even more to know that my clumsiness is what sent him over to the darkside- after checking in with Mami he fell from my sweaty hands, and as he plummeted to his absolute demise. I tried to rush to him and catch him before he touched ground, injuring myself in the process. But I missed. He fell. And died.

Loyal readers, I have to make the long treacherous journey to the Verizon store today and see about replacing Roscoe, a task that is near impossible. No phone could EVER replace him. He was the best thing that ever happened to mobile phones. He was like family.

I will miss him everyday of my life.

*smooches...seriously bummed about my phone*
----------
it's the longest relationship I've had since my divorce *sigh* I can't even fathom having to use anything else...

and how BAD do I feel? N read this as a draft and CRIED. My poor baby cried real tears for Roscoe. #badmommy